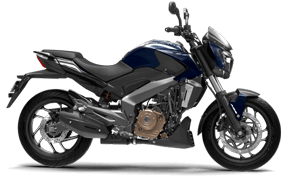 Just the same concept that you saw in CS400, the Bajaj Dominar 400 is one of the most styling bikes. It derives its name from the Spanish word ‘Dominar’ that refers ‘to excel or exceed in power’, Bajaj Dominar 400 combines is a combination of cruiser and comfort of a tourer. With Dominar 400, Bajaj has come out with a new moniker in its portfolio that has the power to carry the tag of the next flag bearer.

Coming to the power, it has the needful mechanical strength from single cylinder petrol engine displacing 373cc paired to the six-speed gearbox. When we talk about its features, it carries various segment that includes the first tech with a handful of other advanced equipment that the Bajaj has presented for the first time in a model.

The new Bajaj Dominar 400 is very affordable as compared to other competitors of the market. In 2014, it has come out as CS400 at the 12th Auto Expo. Having undergone several name changes, the Bajaj finally settled at the Dominar moniker for the sports motorcycle that refers to the power and strength of the prowess. It has various features.Power of the new Dominar 400 comes from the 373cc, single cylinder engine that complies with the BSIV emission.

With its great dimensions and low-slung stance, the Bajaj Dominar 400 grabs all attention. Fit and finish levels are much better than any other offering from Bajaj and a fine example of that is the complex welding on the pressed steel swingarm. The perfect feature of the Dominar 400 is the all-LED headlight, that offers brilliant luminance while the light spread is also attractive.

The Bajaj Dominar 400 looks like a muscular motorcycle and has a performance that lives up to the suggestions thrown by its lines and is a new breed of affordable performance bikes for the masses. If you’re looking for an affordable, fast and comfortable highway cruiser that performs well in the city too, then the Dominar 400 is certainly an option worth shortlisting.

The great aspect of the Dominar 400 is the four-stroke, single-cylinder, SOHC, four-valve, 373cc motor with patented Bajaj triple spark technology - DTS-i. Mated to a six-speed gearbox, the motor delivers 35PS at 8,000rpm and 35Nm of peak torque at 6,500rpm. Weighing at 182kg, the dual-channel ABS-equipped Dominar 400 gets 320mm dia disc (largest in its segment) at front.