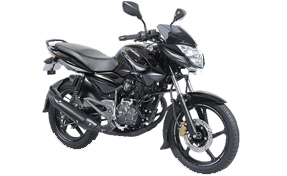 Bajaj Auto is expert at manufacturing great bikes with amazing specifications. Bajaj is great at serving highly efficient vehicles which are powerful as well. Over the last few years, the Pulsar has always maintained a strong position in the hearts of many Indians. The Bajaj Pulsar 135 LS has been manufactured to provide the true spirit of biking among the bikers. This bike is the first bike of the entire Pulsar series. It is basically a fascinating bike with amazing looks, great performance and fuel efficient as well.

The Bajaj Pulsar 135LS is the first model in the Pulsar range, that serves consumers with a sporty character. The Pulsar range of motorcycles is the affordable series of Bajaj in India.

The motorcycle is of 135cc with the single cylinder air-cooled engine, four valve engine that produces 13.56bhp and 11.4Nm of torque. Paired with a 5-speed gearbox, the 135cc unit allows the motorcycle to hit a top speed of 112kmph. It carries telescopic front suspension with anti-friction bush and five-way adjustable Nitrox shock absorbers at the rear. It is 1,995mm long, 765mm wide and 1,045mm tall with a wheelbase of 1,325mm and tips the scales at 121 kgs.

The Pulsar 135LS is there in the market in three colours – black, blue and red. The motorcycle is available at Rs 60,704 (ex-showroom) and it competes with the Honda CBF Stunner, Hero Ignitor.

The all new Bajaj Pulsar 135 provided is basically a fresh design which makes it stand apart from the league. It carries the dimensions of 1995mm x 765mm x 1045mm, (LxWxH) with such dimensions it looks taller and longer. It has a ground clearance of 165 mm. The motorcycle comes equipped with a unit of Telescopic suspension, with anti-friction bush at the front while 5 way adjustable, Nitrox shock absorber suspension system at the rear that ensures a high level of comfort.

Bajaj Pulsar is one of the best bikes by Bajaj and the upgraded model of the same is always acceptable and loved by most of the buyers. It is a combination of affordable bike and good looks with great specifications then why not you go for it.

Bajaj Pulsar 135 with 134.66cc consists of 4-valve, DTS-I air cooled engine which provides a superlative performance and is mated to a 5-speed manual transmission gearbox along with the wet multi-plate clutch. The bike provides a maximum power of 13.3bhp at 9000 rpm and a maximum torque of about 11.4 Nm at 7500 rpm.

A first-class bike by the Bajaj for you. With an affordable cost, it is attracting many customers towards it. With great specification, it is the best option to buy.

There is no doubt in saying that insurance is a compulsory thing to own, especially motor insurance as it is mandated by the Indian government. You would not be liable to drive legally on the roads of India without a valid insurance that is why you should go for it while buying bikes.

Headlight - Kick and Self Start

The Bajaj NS160 is one of the top products in terms of pricing and features. The NS160 carries all the required design elements. One can easily see a difference in the competitors as well. Moreover, it also shares the perimeter frame from the NS 200, making it a better handling motorcycle as compared to the Pulsar 150.

The basic design of the Bajaj Pulsar NS180 has been inspired by Pulsar NS200 that is the maximum a hit fashions. It additionally gets a breakup clutch and aluminium plate which is similar to the one placed on the Pulsar NS200. The instrument console tyres and brakes are expected to be same as its predecessor.

The Bajaj Pulsar 220F become an innovative motorbike while it made its debut over a decade ago. Among the essential reasons for its achievement, its sporty look is one of the best one. And we have to admit that the Pulsar 220 is greatly well and can nevertheless hold its very own, even in the company of current opponents.

The Bajaj Pulsar NS200 relaunched in 2017 providing a few updates with BS IV-compliant engine. It's been positioned among the Pulsar 220F and the Pulsar AS200.The brand new Pulsar NS200 receives three new twin-tone paint schemes to set it other than the older model. Additionally, new is a '200' sticker on the tank extension, a belly pan, rim tapes and a tank pad much like the only Dominar400

Bajaj Pulsar RS 200 is a totally faired motorbike from Bajaj which has undergone complete enhancements. Up the front, it gets twin projector headlights and rear features crystal LED tail lamps. The motorcycle propels on a single cylinder, 4 stroke, SOHC, liquid-cooled 199.5cc engine generating 24.16 bhp at 9750rpm and 18.6Nm at 8000rpm. top pace accomplished by using the fully-faired bike is round 140.8kmph.