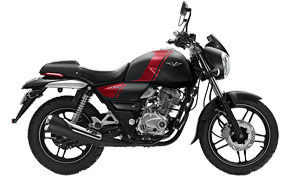 The Bajaj V12 is a version of the– the V15(popular bike). It carries great features and amazing engine that completely makes it a rival to the Hero Glamour, Honda CB Shine, Yamaha Saluto, TVS Phoenix and the Suzuki Slingshot+, etc.

The Bajaj V12 has come out with a neo-retro look which looks more impressive because of the muscular fuel tank, trendy removable rear cowl and the chrome-rimmed headlamp, all borrowed from the V15. Moreover, bits like the alloy wheels and the instrument cluster have been revised just to reduce cost. It has tubed tyres in place of tubeless ones with the aluminium finish.

V12 carries a 125cc single-cylinder engine that delivers 10.5bhp and 11Nm of torque. Unlike its competitors in the same price, the V12 gets a five-speed gearbox. A front disc brake is an option. The engine has been tuned to offer ample torque in the low-end and mid-range. Efficiency is also a great thing to consider. The V12 is offered in four paint schemes – blue, red, black and white. The V12 is available at Rs 58,300 for the drum brake version and Rs 61,000 for the disc brake version (all prices ex-showroom, Delhi).

The new backrest sits on the grab rails with a black cushion. The retrofitted backrest will cost around Rs 1,200. Barring the backrest, the motorcycles remain visually and mechanically unchanged.

The black, blue and red colour schemes are carried over and with same decals. Instrumentation, headlamps and tail-lights are also the same. V12 carries a 124.5cc engine that makes 10.5hp and 11Nm of torque, and the V15 using a 149.5cc mill which produces 12hp and 13Nm of torque. The V15 continues to be equipped with a front disc as standard, while the V12 has it as an optional extra.

Bike refers to be the best mode of travelling, but when it comes to buying bikes then things are a little bit confused as there are several options available. This is a first class bike with inbuilt great features or specifications which makes it a great choice for all.

The Bajaj V12 is of 124.5 cc that consists of a 4-stroke single cylinder, air-cooled SOHC DTS-i engine producing 10.7 PS @ 7500 worth of peak power output and a capable torque of 10.9 Nm @ 5500 rpm. This engine is coupled with a manual 5-speed transmission that enables seamless gear shifts and power transmission to the wheels.

The braking duties of Bajaj V12 are met by 130 mm drum brake units that sit on both ends of the bike. Same to its 150 cc sibling, the V12 ensure a notable ride quality inferable from 30mm front telescopic forks and Nitrox (gas-filled) twin shock rear suspension unit. The 125 cc commuter comes in 3 great shades which include – Ebony Black, Ocean Blue, and Heroic Red. Bajaj V12 falls in a premium commuter segment where it competes against Yamaha Saluto, Hero Glamour 125, and Honda CB Shine SP. You can buy the commuter at a reasonable price of Rs 58,459 (On-road, Delhi).