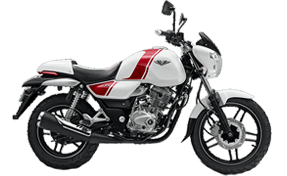 The new great yet attractive bike by Bajaj. This time Bajaj has worked great on new design and comes out with this amazing 150cc that gives a tough competition to V15. It consists of a new 149.5 cc, single cylinder, four stroke engine which provides decent power and torque output. You should note that only the fuel tank is built from the metal of INS Vikrant that also gets a mention on the meaty tank. On the feature front, the bike lags behind, but it is great in terms of performance.

Bajaj’s new V15 commuter bike is a bike with strength and ruggedness. It employs a new DTS-i engine that pumps out decent power output. Bajaj claims that new V15 commuter bike has developed 25 percent higher torque than potential rivals in the section. Complimented by a masculine look, Bajaj V15 carries great features such as 18-inch Eurogrip tyre up front and 16-inch tyre at the rear.

Apart from this, in the same, you will get an INS Vikrant insignia on the fuel tank and a removable cowl for pillion seat. Bajaj V15 is available in two colors- Pearl White and Ebony Black. Available in limited units the complete bike isn’t made of the metal soured from INS Vikrant aircraft, it is just the fuel tank with metal from the aircraft carrier.

Dimensionally the bike measures 2044mm long, 780mm wide, 1070mm high and has a kerb weight of 135.5 kg. The wheelbase and ground clearance are around 1315mm and 165mm respectively while the saddle height measures 780mm. It has the double downtube frame, the bike wears a new neo-retro design reminiscent of the bikes from the 80s. Albeit, the commuter features some modern touches that kind of balances the look.

The robust and great fuel tank is built from the metal sourced from INS Vikrant aircraft carrier from the 1971 war. At the back you will get rear seat cowl, chrome work is visible on the body but thankfully it isn’t overdone. The large headlamp in front evokes agility, there is an analog instrument panel featuring speedometer, odometer and fuel gauge.

Bike refers to be the best mode of traveling, but when it comes to buying bikes then things are a little bit confused as there are several options available. This is a first class bike with inbuilt great features or specifications which makes it a great choice for all.

For power development, Bajaj has employed a new 149.5cc, single cylinder, four stroke, SOHC 2 valve, air-cooled DTS-i engine capable of generating maximum power output of 11.83 bhp at 7500rpm along with 13Nm at 5500rpm. The engine comes paired to a five-speed transmission. The bike does fairly well between 40 to 70 kmph, however, vibrations can be felt post 70 kmph leaving the engine fatigued.

Carrying out suspension duties are telescopic forks in front and twin-spring gas-filled shock absorbers at the rear. The gear shifting is a tad clumsy, although it isn’t all bluntly rubbery, there is still some room for improvement here. The carburetted engine yields promising mileage of around 70 kmph which is imposing.