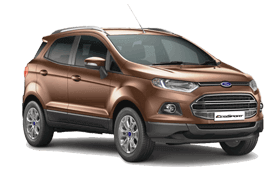 The Ecosport is a subcompact crossover SUV that is manufactured by Ford. It was first manufactured at Brazil's Camacari plant, and the second generation concept model of Ecosport was later launched in 2012. Since the same year, the Ford Ecosport has been assembled in India at the Chennai plant. The vehicle's engine has been upgraded to meet the BS6 emission standards since 2020. Some of the major competitors of Ford Ecosport are Maruti Suzuki Vitara Brezza, Mahindra XUV300, Tata Nexon and Hyundai Venue.

With the 1-litre EcoBoost petrol engine dropped to meet the BS6 emission standards, the Ford Ecosport is now available with two engine variants. The variants either have a 1.5-litre TDCi Diesel engine or 1.5-litre Ti-VCT Petrol engine. Where the former churns out a maximum power of 99bhp, peak torque of 205Nm and displacement of 1498cc, the latter produces 120bhp of maximum power, 150Nm of torque and 1497cc of displacement.

With 6 variants named Ambiente, Trend, Trend Plus, Titanium, and Titanium Plus, Ford Ecosport is a front-wheel-drive that comes with both manual for diesel and petrol variants and automatic for petrol variants only. Its transmission is paired with a 5-speed gearbox.

With a major update in the display screen, the Ford Ecosport comes with built-in navigation, Apple CarPlay and Android Auto. Some other sought after features of this SUV are the cooled glove box, 6 airbags, keyless entry, rear parking sensors and camera, ABS, start-stop button, steering adjustment and electrically adjustable rear view mirror.

*The values are calculated on the basis of the city (Bangalore) and year of registration (2020).

You can include a few exclusions from above as part of your Ford Ecosport car insurance by simply purchasing it at an additional price. A few add-ons to look out for are:

You can easily renew your Ford Ecosport car insurance with the help of the 10 minutes process on PolicyX.com's portal. To get started right away, you can scroll up on this page and find the option to Get Instant Quotes. The next few steps required you to do the following:

1. Will my accessories cover add-on protect the modifications that I have given to my Ford Ecosport's mechanical setups?

No, your accessories cover add-on will not protect the modifications that you have given to your Ford Ecosport's mechanical setups. These kinds of customizations are not eligible for claims even under the add-on.

2. Can I claim for car parts that are not approved by my insurance provider under Consumables Cover add-on?

No. Even if you have the parts of your car covered under Consumables cover add-on, you will not be able to make a claim if it is not approved by your insurance provider as a replacement for the original part.

3. Will my claim get rejected under Consumables Cover add-on if I get the vehicle repaired in at a local garage?

Unless your vehicle is repaired at an authorized repair shop as per your insurance provider, your claim under Consumables Cover add-on will be rejected.

4. Will I be able to make a claim separately for the car parts of my Ecosport in case of a total loss?

No, you cannot make a separate claim for the parts of your Ecosport even under Consumables or Accessories cover add-on in case of a total loss.

5. I didn't get my vehicle inspected by the insurance provider before getting it repaired. I have now filed a claim for the same. Will my application get rejected?

Yes, it is likely that your claim will get rejected considering the insurance provider did not have the opportunity to inspect the damage or loss before the repairs.