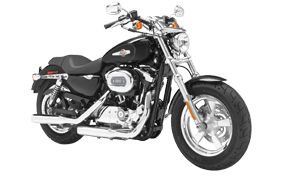 Harley-Davidson started out in a small shed in Milwaukee, Wisconsin, back in 1903 and at present, it is one of the most iconic motorcycle manufacturers in the world. Since 2000, Harley-Davidson has worked hard to retain its image as an American icon while at the same time reaching out to a new generation of bikers.

Harley Davidson began its journey in India in 2009. It had set up an assembly line in the country and is dedicated to serving Indian bike enthusiasts with its luxurious sturdy cruisers. Harley-Davidson India has launched the Sportster 1200 Custom in the country with the starting price of Rs. 8.90 onwards (ex- showroom, Delhi). The launch took place in Jaisalmer during the Harley NH Zero Ride that kick-started yesterday from Jodhpur and will conclude on January 30.

The bike draws its power from a 1,202cc, Evolution, air-cooled engine that is coupled to a 5-speed transmission. The bike is built around a mild steel tubular frame having 30mm forks up front and dual coil over threaded preload adjustable shock absorbers at the rear. The 1200 Custom is equipped with single disc brake with dual-piston at both ends, with Anti-Lock Braking System (ABS) as standard. The bike runs on Michelin Scorcher 31-inch tires for better grip and on-road stability. Triple-digit speeds arrive rather effortlessly and the motor feels joyous pottering at speeds around 100-120kmph in fifth gear.

The company has also given wide customization options to its buyers to choose from that are available for seat, handlebar, wheels, foot controls, paint and graphics and engine finish. The bike is available in three colors - Vivid Black, Charcoal Pearl, and Superior Blue along with three dual-tone colors. The company has also given various options of pin striping to its customers that are different for a single as well as dual tone color options.

The floating instrument cluster looks interesting with a large analog speedometer and a small digital readout for the tachometer, gear position indicator, trip meter, odometer, clock and distance to empty.

Harley-Davidson is offering this bike with its classic cruiser styling. The round headlamp, large fuel tank, and the generous looking saddle are all quintessential Harley design elements. Also, there is no dearth of chrome on the motorcycle and the extra bling hikes its visual appeal further.

The cast aluminum alloy wheel design which is reminiscent of the classic Fuchs wheels found on Porsches. The Harley-Davidson 1200 Custom has a comfortable and laid-back riding position. The pullback handlebar, front-seat foot pegs, and the low seat have been designed to make it comfortable on long rides.

The 1200 Custom gets a minimalistic design for an American cruiser, though the liberal use of chrome makes it look its part as an expensive motorcycle. Switchgear quality is top notch while the overall fit and finish quality is satisfactory. Harley- Davidson Sportster 1200 Custom a diminutive bike but it also doesn’t intimidate riders like other larger cruiser bikes normally do. The mildly raised handlebar, low saddle, and the front-seat foot pegs result in a very relaxed riding posture.

It is a delightful motorcycle that will make for a great companion on long highway journeys. It looks what an old-school Harley-Davidson is supposed to look like and at the same time has the road manners of a modern motorcycle.

At the Harley-Davidson Insurance Services, the customer will be provided the service by the trusted motorcycle insurance agency that knows all about the Harley Davidson motorcycle lifestyle. One will experience best industry-leading services, coverage, and support. It’s why riders should trust the insurer to help and protect them and their bikes.