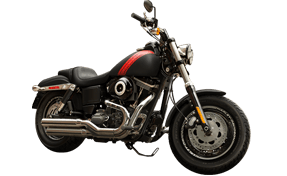 Harley-Davidson started out in a small shed in Milwaukee, Wisconsin, back in 1903 and at present, it is one of the most iconic motorcycle manufacturers in the world. The Harley Davidson Fat Bob looks menacing and even gives the rider a very aggressive feel and it is that kind of bike. 2018 Fat Bob is one of the most attractive machines, carrying the option of two powerful engines and all-new design language.

Harley-Davidson’s Touring line-u Harley Davidson Fat bob debuted last year with the new Milwaukee-Eight engine proved to be rather impressive Milwaukee-Eight, was Harley Davidson’s only third all-new big twin engine in 80 years, and it brought with it a whole raft of features including four valves and two spark plugs per cylinder, a larger alternator, improved air box and even oil-cooling.

The Harley Davidson Fat Bob is designed for the zombie apocalypse. It has amazing 16-inch wheels that are running chunky 150-section at the front and 180-section rear tires, and this is along with the fat 2-1- 2 bronze-finished exhaust headers of the bike culminating in twin stubby mufflers. The muscular look of the Harley Davidson Fat Bob is further enhanced by the extremely short, chopped fenders at both ends of the bike.

The Harley Davidson Fat Bob’s LED headlights and rectangular headlamp unit are unique and play a big part in the wild look Fat Bob in the crowd. The Fat Bob comes with a twin headlamp setup to the dual tail lights at the back. The seat gets a perforated cover, silver contrast stitching and looks sporty and comfortable. It comes with a five-inch 'multi-function' LCD display for a speedometer and the new slash-cut rear fender gets the slanted smoked lens that houses the two red-ringed LED tail lamps.

Harley Davidson Fat Bob is the only bike in this range that gets 43mm inverted forks and twin front disc brakes, much like the new Roadster

The Milwaukee-Eight engine is available in two different capacities – the 114 (1,868cc) and the 107 (1,745cc), with India, only getting the latter spec. For the Harley Davidson Fat Bob, the engine has been updated with twin counter-balancers, which enhance in making the vibrations a lot lower than before; this has allowed the engineers at Harley to attach the motor to the new frame without rubber mounts, essentially letting it become a stressed member of the chassis.

There is also a slight drop in the peak torque figure, which now sits at 145Nm which comes in a bit lower at 3,000rpm. It is mated to a six-speed gearbox and final chain drive. It tips the scale at 309kgs, a 17kg reduction over the previous model. The bike now rides on 43mm Showa upside-down forks up front and a mono-shock at the rear. Stopping power comes from a dual-disc setup up front and a single disc at the rear.

The exhaust valves of the bike are oil-cooled and the traditional undersea oil reservoir has been dumped in favor of an oil pan in the engine sump. The latter is supposed to reduce the amount of heat felt by riders.

As Harley Davidson is an expensive bike. it is not easy to maintain the cost of even slightest repair of the bike during any mishap without burning hole in the pocket., you want your motorcycle protected, along with your pocket, bike insurance is the answer.

At the Harley-Davidson Insurance Services, the customer will be provided the service by the trusted motorcycle insurance agency that knows all about the Harley Davidson motorcycle lifestyle. One will experience best industry- leading services, coverage, and support. It’s why riders should trust the insurer to help and protect them and their bikes.