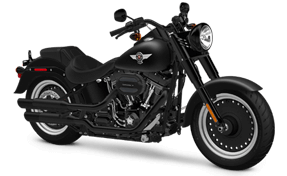 Harley-Davidson started out in a small shed in Milwaukee, Wisconsin, back in 1903 and at present, it is one of the most iconic motorcycle manufacturers in the world. The Fat Boy went on to become one of the largest selling Harley-Davidson models for decades. And now, in 2018, it gets leaner, meaner and gets a complete makeover. It had set up an assembly line in India and is dedicated to serving Indian bike enthusiasts with its luxurious sturdy cruisers.

Harley Davidson Fat boy is a motorcycle with tons of attitude and this comes across even more strongly when the rider swings a leg over it and settles into its comfortable and cozy seat. The handlebar of the bike is wide but it does not demand the arms of the rider to be wide open and there’s nothing hindering your view of the road ahead. The bike has a simple digital-analog instrument cluster that is placed neatly within a tank-mounted shroud and on either side of it are two fuel-tank caps, with the one of the left being faux but adding to the symmetry.

The Fat Boy isn’t blatantly aggressive but enforces its attitude in the commanding way in which it seats you. The signature Fat Boy elements are all the solid Lakester wheels, the imposing and low-slung head-on stance, and the beefy central mass, that makes it stand out from the crowd. The 2018 model of Harley Davidson Fat Boy replaces most of its chrome with satin-finish metal and, prominently, gets a new LED headlight assembly that looks radical and offers good lighting.

It comes with a load full of features too. It features a wide FLH-style handlebar, a textured leather seat insert, custom metal fenders and a shotgun-style dual exhaust system. The Fat Boy is powered by a Twin Cam 103 1690cc engine that produces a generous amount of power and it's a highway cruiser so don't try and tame it by riding it in the city. It's clearly out of place there.

The 160-section front tyre of the bike is the fattest tyre the folks at Milwaukee have ever planked on a production model. And at the rear, there is an even fatter, 240/40 R18 tyre, giving the bike an imposing stance. Most of the shiny chrome on the outgoing model has been replaced with a brushed aluminum look, called the satin chrome finish. There's keyless ignition, so thumb the starter and the big v-twin cranks to life with a reassuring rumble. The gears clunk into position and give a mechanical feel, but could have been slightly more precise.

The Fat Boy has the engine and gearbox, which have become for all practical purposes unit-construction, and the seat tube has shrunk to a vestigial steady that bolts to the top of the gearbox. It does not have a padlock serve as theft deterrent; there’s now a steering-head lock engaged by the ignition key. Young and vibrant riders love this ride.

At the Harley-Davidson Insurance Services, Repair is done only by the well trained and well-equipped technicians with all knowledge of Harley Davidson. The garage will supply your bike with the Harley Davidson genuine parts and accessories after repair. Hence, the service and protection that one get with insurance is reliable and reputed.

The customer will be provided the service by the trusted motorcycle insurance agency that knows all about the Harley Davidson motorcycle lifestyle. One will experience best industry-leading services, coverage, and support. It’s why riders should trust the insurer to help and protect them and their bikes.

With the perfect bike, insurance one will not only save money but, he/she will also experience customer service and claims support during any mishap with the Harley Davidson on road. The standard features that are including when you opt for Harley Davidson Bike insurance are: