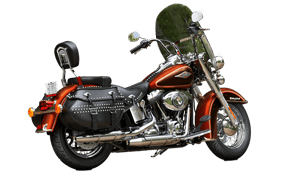 Harley-Davidson started out in a small shed in Milwaukee, Wisconsin, back in 1903 and at present, it is one of the most iconic motorcycle manufacturers in the world. The Harley Davidson Heritage Classic motorcycle used to be an homage to ’50s chrome nostalgia.

Heritage Classic is the one which is built on the Softail (ST) chassis and is a traditional cruiser which has its roots somewhere in the 70's. Complete with the 'Heritage' styling, the Softail classic harkens to the yesteryears and is a stark reminder that the essence of Harley will never be lost. The Heritage Classic has also had traditionally been of Harley-Davidson’s best-selling motorcycles, now made even more functional and comfortable with increased power and improved handling.

The Harley Davidson Heritage Classic has four-valve- per-cylinder Milwaukee-Eight 107ci V-twin with dual counterbalancers to cancel primary vibration. This is a bike that exudes the appearance of an old- school highway cruiser, and one that weighs a whopping 330kg, it turns in alarmingly quickly this allows the engine to be rigidly mounted in the frame, which increases chassis stiffness for improved handling. Harley- Davidson claims the 107ci Milwaukee-Eight makes the new bikes 10 percent faster from 0-60 than the High Output Twin Cam 103 engine used previously.

The Heritage Classic is now equipped with a Day maker Signature LED headlamp and “winged” LED turn signals. Speaking of headlights, a moonless desert night provided a good test of the new LED Day maker lamp’s excellent side coverage and illumination. Manhandling the bike product rider-induced wiggles and wobbles. The fork felt supportive under hard braking, and the rear resisted bottoming in all but the most extreme hits.

Harley Davidson Heritage Classic is a delightful motorcycle that will make for a great companion on long highway journeys. It looks what an old-school Harley-Davidson is supposed to look like and at the same time has the road manners of a modern motorcycle.

Harley Davidson Heritage classic ditched the old Softail’s under-engine hidden twin shocks in favor of a single under-seat coil-over unit. The changes make shock action is conventional-- that is the rear wheel hits a bump and compresses the shock-- whereas the old design extended the shocks when the wheel hit a bump.

The LCD of the Harley Davidson Heritage Classic features a fuel-level bar graph and gear position indicator that both remain persistent as you toggle through the other functions with the left thumb switch. The bike has All-day ergonomics, storage, and wind protection top the list. The Harley Davidson Heritage Classic has Fob-sensing keyless ignition which is another new convenience, and the traditional barrel-key steering-head lock has been replaced by a quarter-turn conventional-style key.

The Heritage classic has new hard-formed “sag less” leather saddlebags that provide a deep rectangular cavity that appears capable of consuming a 12-can case of PBR and it also has a locking flip lid for blue-ribbon security that suits the customers.

If something happens, you want the best motorcycle insurance to help get you back on the road as quickly as possible. With the perfect bike, insurance one will not only save money but, he/she will also experience customer service and claims support during any mishap with the Harley Davidson on road. There are a number of benefits if you own insurance. Some beneficial features to the customers from the Harley Davidson Bike Insurance are as following –