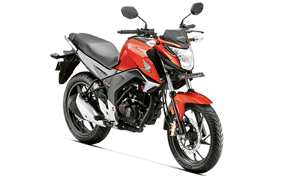 The Honda Revfest event surprisingly brought us a new member of the Indian automobile society, tough enough to play hard with the existing competitors. Named as the Honda CB Hornet 160R, the bike is something which Honda never had purely tried in the past. Premium feel would surround the newcomer as it is not made like every other commuter in the market or by Honda itself.

The lack of a naked bike with pure street bike feel can be fulfilled by the muscular and tough looking body design. Lean bikes have always been Honda's way of biking but the changing market scenario forced them to bring a popular non-Indian bike series name 'The Hornet' under an economical engine size for the country.

The CB Hornet 160R comes inspired by the design of the concept Honda bike, the CX-01, which was showcased at the 2014 Auto Expo. It comes with a bit different approach as all the Honda bikes in the segment are more commuters than the famous street fighter designing. The tank gets a muscular cowl, which houses the Honda's wing symbol over it. The front gets a Honda style headlight and the most noticeable point becomes its mid-ship exhaust design. The alloy wheel design is new to the Honda family and looks great on the Hornet 160R.

The tank has been precisely chiseled from each angle, making it more muscular than any other bike in the Honda's Portfolio. The rear gets an X shaped tail light and a wide tyre, which is always missing from Honda's motorcycle range.The length x width x height of CB Hornet is 2041mm x 783 mm x 1067 mm. Ground clearance of the bike stands at 164 mm with a wheelbase of 1345 mm. The fuel tank capacity is 12 liters and a kerb weight of STD model is 140 kg and CBS model weighs 142 kg. The seat height is 790mm.

Buyers in the premium 150cc segment want an aggressively styled and modern looking motorcycle. And this is one area where the Honda CB Hornet 160R shines in strides. One is welcomed by a trapezoidal headlamp unit, while the large tank and edgy fuel tank extensions give the motorcycle a sharp looking profile. The rear section is petite with split grab rails and the X-shaped LED tail lamp endows the Hornet 160 with a unique looking tail section. Other interesting bits on the new bike include multi-spoke alloy wheels, stubby exhaust canister and a bare carbon finish on the fuel tank and center body panel. The all- digital console is a straight lift from the Unicorn 160, and a redesigned console would have been appreciated.

One of the premium bikes by Honda. This is a smart bike for today generation who wants to talk with the speed with great looks as well. Specifications of this bike are really great and worth to invest in.

The engine used on the CB Hornet 160 is exactly the same unit as seen on the Unicorn 160 but the powerplant has been tweaked to extract more juice out of it. The 162.7cc air-cooled motor churns out 15.9PS of max power and peak torque rating of 14.8Nm. Power is transmitted to the rear wheel by a 5 - speed gearbox.

The Honda CB Hornet 160R employs a diamond-type frame, as seen on the Unicorn 160. Handling of the motorcycle is impressive as it dives into corners with great enthusiasm. Improving the handling dynamics further is the 140mm section chunky rear tyre that aids the rider in increasing the lean angle of the motorcycle. This Honda employs telescopic front forks and a monoshock unit at the rear. Braking is done by petal disc brakes (a first for any production Honda bike in India) along with the option of CBS (Combined Braking System).

In the form of the CB Hornet 160R, Honda now finally has a competitive offering in the premium 150cc motorcycle segment. It looks the part with its sporty styling and chiseled lines. Performance of the motorcycle is also good with respect to its rivals and it offers decent fuel efficiency as well. It seems that Honda has got it right the third time around.

Whenever you are planning to buy a bike, don’t forget to add insurance to it. This is a basic thing that you should have after purchasing a bike. It will protect you from unwanted mishaps. Moreover, as per the Indian law, it is compulsory to have a bike insurance cover, otherwise, you will not be legally allowed to drive your bike on the roads of India.