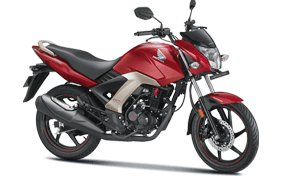 The Honda CB Unicorn is an executive commuter motorcycle. While Honda had discontinued the CB Unicorn to make space for the CB Unicorn 160, the strong demand led to the model being relaunched in India at the 2016 Auto Expo.

Cosmetically, the new CB Unicorn is identical to the older model. The conservative looks of the motorcycle are brought out by the simple and clean decal-free bodywork. The sculpted fuel tank has been designed to allow you to comfortably latch your leg on to it and can gulp down 13 liters of fuel.  The Honda CB Unicorn is built around a diamond type frame. It is powered by a 149cc single-cylinder engine, which delivers 13bhp and 13Nm of torque. Mated to a five-speed transmission, this super- refined engine has played a major role in giving the CB Unicorn its cult status.

The CB Unicorn rides on 18-inch wheels. The front wheel gets a 240mm disc brake while the rear wheel gets a 130mm drum unit. The suspension setup is made of conventional telescopic front forks at the front and a mono shock in the rear. The CB Unicorn is positioned between the Shine SP and the CB Unicorn 160 in the lucrative executive commuter segment. It is available in two paint schemes – black and red. It rivals the likes of the Bajaj Pulsar 150 DTS-i, Hero Hunk, and the Yamaha SZ-RR. The Honda Unicorn 150 is priced at Rs 69,961 (ex-showroom Delhi).

Unicorn was launched almost seven years back and till now it has received only a few changes. The bike is certainly not as charming as its name but looks decent. There is a sense of familiarity in its appearance which should be rectified by Honda. Its headlight and mudguard are the same but now its new visor features chrome finish just above its headlight which adds a premium touch to this bike.

The 3D emblem of Honda on its big fuel tank looks classy with new graphics on its side panels. Its elevated silencer with heat shield complements the all-black color theme on this bike featuring black alloy wheels, engine and grab rail. It has a full-size rear fender and tail light which adds muscularity to this bike with clear lens indicators and most importantly you can’t ignore its mono shocker at the back. It’s an elegant bike in terms of appearance but falls short of the rising demand for sporty looks.

Honda CB Unicorn is an exclusive product of Honda. The great features that this bike carries can easily attract any person easily. There are many other options as well, but this comes out as the best option to look for. It comes out with great features at an affordable price.

The bike features one of Honda’s most acclaimed 150cc engines. Drive this bike once and you can’t stop admiring this engine. It is also available in other bikes like Hero Hunk and X-treme with different specifications.

The most noticeable thing in this bike is the arrival timing of its torque. It’s available as early as 5500 rpm which avoids the lack of power and makes it efficient to move in bigger gears at slow speeds. There is no need for frequent gear shifting as this bike has a well-distributed power band which can be effectively used with the help of perfect gear ratios.

According to Honda, Unicorn does 0- 60km/hr in less than 5 seconds, which is quite possible due to its early availability of torque. This makes it matchless in city driving and it helps while overtaking on highways. The bike easily reaches 8000 rpm mark and can cross the speed of 100 kmph. This is a flawless engine in terms of refinement and vibrations and feels far better than others like Bajaj Pulsar150. With Unicorn, you enjoy linear power delivery with smooth gear transitions.

One of the amazing products by Honda. This is something that you must always desire of. There are several options to consider, but this product is really worth to look for. You will also get several benefits along with it.

Bike insurance is something that you should never decline. It is a mandatory thing to have to drive legally on the roads of India. Under the Motor Insurance Act, it is compulsory to carry at least third party liability insurance cover. However, if you go for a comprehensive insurance cover then you will get complete protection against any unforeseen mishaps on roads.

The Honda CB Unicorn 160 is a premium 160cc motorcycle, which has been aimed at a young breed of the audience looking for a stylish commuter motorcycle for use on a daily basis. The CB Unicorn 160 fills in the void which was created in Honda’s line-up, when it discontinued the CB Dazzler, a few years ago. The premium 150cc segment is full of muscular motorcycles, and the CB Unicorn isn’t any different.

Cosmetically, the CB Unicorn 160 carries influences from the Honda CX-01 concept which was unveiled at the 2014 Auto Expo as well as the CB Trigger.  The fuel tank gets a muscular design while the headlamp gets a bikini fairing. Most of the electrical components have been shared with the CB Unicorn and the CB Trigger, which should help in cutting development/manufacturing costs.