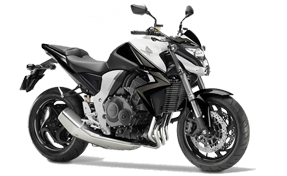 The naked superbike from Honda, the CB1000R, was launched in India in 2009 along with its elder sibling the CBR1000RR. The Honda CB1000R has a triangular-shaped headlamp with a small circular pilot lamp at the lower apex. The exhaust pipes coming out of the engine are distinctly visible from the front. The crease lines on the bulky fuel tank make it look muscular and it also boasts of a fully digital odometer.

The CB1000R is powered by a 1000cc Fireblade engine which has been re-tuned for mid-range performance. It comes with fully-adjustable forks and is equipped with radial front brakes seen on the Fireblade. It features an all-new single backbone frame and a single sided swing-arm which connects the main body to the four-swept- spoke ninja-star rear wheel. Another highlight of the bike is the H.I.S.S. security system it is provided with. The bike competes with the Yamaha FZ1, the Kawasaki Ninja Z1000 and the Triumph Speed Triple in the Indian market.

New forged pistons, re-profiled combustion chambers, higher-lift camshafts, larger intake and exhaust valves, and 44mm throttle bodies (plus 8mm), along with a more aggressive-looking 4-into- 2-into- 1 exhaust system, are responsible for the improved engine performance. Throttle control is now by wire thanks to a new ECU that offers four rider-selectable throttle-response modes (Standard, Sport, Rain, and User).

Steering geometry is listed as 25 degrees of rake with the 3.9-inch trail. Wheelbase is 57.3 inches, 0.4 longer than the previous edition, yet the swingarm is half an inch shorter. Weight distribution is thus more rearward biased, 48.5 percent front, 51.5 rear. Showa supplies the suspension, front brakes are 310mm discs squeezed by four-pistons calipers, and the bike rolls on 120/70-17 front and 190/55-17 rear radials. With a full gas tank, the CB1000R is said to weigh 467 pounds.

It is a classic version of Honda bikes. This bike comes out with great features and looks. One of the classic piece when it comes to look and specifications. This bike is available at an affordable price.

The six-speed gearbox now features 4 percent “shorter” ratios to enhance throttle response and initial acceleration. In fact, according to Honda, the new CB1000R is quicker than the current CBR1000RR through the first three gears up to 80 mph. The engine is harnessed in a steel backbone-type frame with large aluminum pivot plates that solidly locate the footpegs and single-sided swingarm.

One of the amazing products by Honda. This is something that you must always desire of. There are several options to consider, but this product is really worth to look for. You will also get several benefits along with it.

Bike insurance is something that you should never decline. It is a mandatory thing to have to drive legally on the roads of India. Under the Motor Insurance Act, it is compulsory to carry at least third party liability insurance cover. However, if you go for a comprehensive insurance cover then you will get complete protection against any unforeseen mishaps on roads.