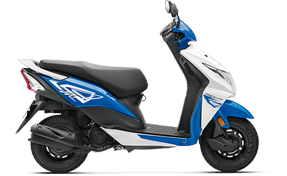 Honda Two-Wheelers India has launched the MY 2017 Dio in India at a starting price of Rs 49,132 (ex- showroom, Delhi). As is the case with other HMSI models, the 2017 model of the Dio now gets a BS IV compliant engine and the auto headlamp on (AHO) feature.

The Honda Dio scooter now gets new graphics on the body, which make it look much funkier. The front apron has been slightly tweaked and the scooter now gets a dual-tone colour scheme as well. As far as equipment is concerned, the new Dio gets a mobile-charging port under the seat, a V-shaped LED light on the top of the front panel and a restyled instrument console as well.

The new Dio scooter also gets Honda's patented combi-braking system, tubeless tyres and a slightly wider seat. But the one thing that took us by surprise was the omission of telescopic forks up front and the non-availability of disc brakes even as an option.

The Dio features a moto-scooter design with a large headlamp and turn indicators integrated into the front apron. In place of where the headlamp is mounted on conventional scooters, it has LED DRLs. The tail lamp is a large one with integrated clear lens indicator. The Dio gets a two-tone paint scheme with graphics and is available in five colours. Features include Automatic Headlamp On (AHO), tubeless tyres and combi brake system. There is a mobile charging outlet in the under seat storage bay. Honda has used 90/100 sized tubeless tyres in front and back and the rim size is similar on both ends measuring around 10 inches.

The 109.2cc, single cylinder, air-cooled engine powering Dio is good for maximum power of 8bhp at 7000rpm along with peak torque of 8.91Nm at 5500rpm.Mated to a V-matic transmission, Dio is claimed to offer top-speed of 83km/h. Moreover, the HET technology equipped engine is claimed to deliver impressive mileage.

Features available on Dio include a new 3D emblem, sporty body graphics, 18 litres of under storage space, wide seat, comfortable leg space in front, combi-brake system and tubeless tyres among others braking force is derived from 130mm drum units in front and rear. ABS is missing in the model, but it features a combi-brake system which brings front and rear brakes into action at the same time when the rear brake lever is pulled.

For those who are searching for an affordable bike to meet daily requirements of travelling then Dio is the best option. An affordable yet effective bike by Honda which delivers great results to you.

Everyone is aware of the Indian Motor Act which stated that having a valid bike insurance is mandatory if you have a two-wheeler. It will not only help you in dealing with unwanted mishaps on roads but also protect you from third party liability in case of need. There are several other benefits that you will get once you buy the effective two wheeler insurance for your Honda Dio.