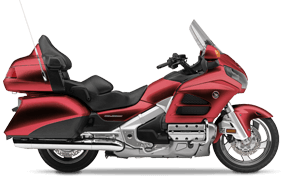 The 2018 Honda Gold Wing made its global debut at the Tokyo Motor Show earlier this year, and now Honda Motorcycle & Scooter India (HMSI) has announced bookings open for the company's flagship tourer. The 2018 Honda Gold Wing is priced at Rs 26.85 lakh (ex-showroom, Delhi) and is a completely new motorcycle packing in improved technology, performance, and luxury over its predecessor. Honda's chariot on wheels also comes with the third generation Dual Clutch Transmission (DCT), apart from the completely new chassis, and design.

The Honda Gold Wing has been around for over four decades now and the motorcycle has been nothing less than a touring icon. With the 2018 edition, Honda has further introduced added refinement on its offering while packing in more power from its six-cylinder engine. Visually, the tourer looks sharper, gets a small front fairing and an electrically adjustable windscreen. You continue to sit like a king on the Gold Wing with enough support for the pillion as well. The massive panniers and top box can offer up to 110 liters of storage and accommodate most of the luggage, while the bike is now tech-friendly with a host of connectivity options.

The Gold Wing GL1800 is based on a lightweight and rigid twin-spar aluminum frame which comes with a single-sided Pro-Arm swingarm. It is powered by a 1,832cc flat-six engine which is good for 116bhp and 167Nm of torque. The liquid-cooled engine is shaft driven and comes mated to a five-speed gearbox.

While the power figures might seem to be on lower side considering the size of the engine, the Gold Wing motorcycles have never been developed with an emphasis on performance. The engine has ample mid-range torque to make the motorcycle comfortable on long rides. The Gold Wing GL1800 comes with the combined braking system (CBS) and an ABS to provide optimum braking in all conditions.

As the president of Hondo Motorcycle rightly says, this is truly One of the finest global offerings of Honda to India. Adorned with best refinements, reliability, and power, Goldwing GL 1800 is blessed with complete comfort and instrumented with all modern equipment.

For a power drive, the Honda Goldwing GL 1800 is loaded with a 6-cylinder 1832 cc engine, which has highly efficient and reliable for the Indian terrains. Weighing about 405 kilos is sure to win all hearts with its fascinating look and intense performance.

Honda is a two-wheeled paradox, rightly said that will deceive your eyes for its immensely bulky exterior but give you're a fantabulous ride to alter the law of physic, you might say so! The developments since its inception have been glacial in terms of engine covers, cooling fans, radiators ABS, on bike airbags and more. The GL 1800 engine churns an unstressed 116 BHP at the rate of 5500RPM in a combination of 167NM of torque at the rate of 4000RPM. The smooth power plant is mated to a 5-speed box, which consists of four gears and a labeled Over Drive.

There is not a specific reason to go on this bike as this bike is full of plus points. Whether it is about the looks, prices, design, and specifications. All of the things are just perfect. So you should not have a second doubt while choosing this for yourself.

There is no doubt in saying that driving without a valid insurance is illegal. You must buy at least a third party liability cover to get the best version of it. It is full of safety features along with great benefits. So you should go for it otherwise you wouldn’t be able to drive legally on the roads of India.

Starting - Self Start Only