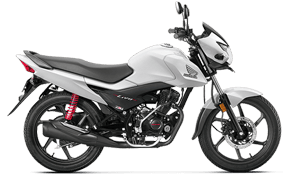 The Honda Livo is a commuter motorcycle which shares the lucrative 110cc segment with its sibling, the CB Shine. The bike has been targeted at urban and rural customers who need a stylish commuter motorcycle, which doesn’t compromise on fuel efficiency.

While the styling seems inspired by the CB Twister, the body panels Livo get a completely new design to give it a fresh look. The sculpted fuel tank gets aggressive fibre extensions while the bikini fairing around the headlamp gets an edgy shape. The entire bike, except for the fuel tank, panels, headlamp cowl, mirrors and the suspension springs gets a blacked-out theme, giving it dark undertones.  The upright handle bar, the positioning of the foot pegs and the long seat has been designed to minimise strain during commutes as well as long rides. The Livo comes with tubeless tyres and six-spoke alloy wheels as standard while a front disc brake is offered as an optional extra.

The Livo is built around a diamond frame borrowed from the CB Twister. Powering the Livo is the tried and tested 110cc four-stroke single-cylinder engine that comes with Honda Eco Technology (HET). The engine puts out 8.2bhp and 8.63Nm of torque through a four-speed transmission, and returns with a company claimed fuel efficiency of 74kmpl. The Livo rides on conventional telescopic front forks and spring loaded hydraulic rear suspension.

Honda Livo is a commuter with sharp, sporty features. At the front, it gets a stylish new headlamp, a black windscreen on top of it with fin-like air-ducts on the side. The curved fuel tank gets an aggressive shroud that extends into the long and sleek saddle. A grabrail on top of a compact taillight finish the look of the bike. While the bike looks appealing, the instrument console comprises of two rather odd looking hexagonal shaped analogue units. The Livo is available in six colors: black, white, brown, blue, red and grey.

This is a smart bike of today's world that serves great benefits in terms of features and specification. With the growing demands, the Honda is delivering the best to its customers. Just get it today for yourself at an affordable price.

The single-cylinder, 109.19cc, the air-cooled engine produces 8.3PS at 7,500rpm and 8.6Nm at 5,500rpm, mated to a 4-speed gearbox. For suspension, it uses telescopic forks at the front and adjustable dual shock absorbers at the rear. For braking, the commuter employs 130mm drum brakes at the front and rear. You can also choose to get a 240mm disc at the front. The bike gets 18-inch wheels shod with tubeless tyres.

The Livo returns a claimed mileage of 70kmpl with a fuel tank capacity of 8.5 litres and reaches a top speed of 86kmph. The bike is extremely light and the disc variant stands at a kerb weight of 111kgs. This is the biggest reason to prefer this.

When it comes to two wheeler insurance, you should not think twice. You must buy it from the first day of owning a two-wheeler. Without the same, it will not be easy for you to deal with the unwanted mishaps on the roads of India. It is compulsory that you have to buy to drive on the roads of India. So don’t think, just go for it.