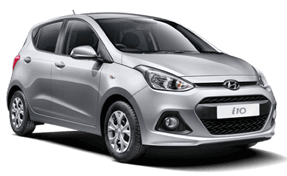 About Grand i10 Car Insurance

A slightly larger version of Hyundai i10, the Grand i10 is a city car, which was developed by the South Korean Manufacturer Hyundai. It was primarily developed for the Asian market and was launched in India in the year 2013. The Grand i10 slots between the first generation i10 and i20, and is available in four variants: Era, Magna, Sportz and Asta. These variants are further available in the two engine options. It now competes with the likes of Maruti Swift and other similar cars in the segment in the Indian market.

Key Features of Hyundai Grand i10

The Hyundai Grand i10 has two engine variants to offer: 1.1 litre three cylinder U2 CRDi Diesel engine and 1.2 litre four cylinder Kappa dual VTVT Petrol. Where the diesel unit offers a maximum power of 74bhp, the petrol unit produces a maximum of 82bhp of power.

With a host of features to offer, the Grand i10 comes with dual-tone interiors, keyless entry, auto-folding outside mirrors that open and fold when the car is unlocked and locked, and 1GB internal memory to store music.

Some of the key features for each of its four variants are:

Premium for Grand i10 Car Insurance

The insurance premium for the Grand i10 may differ between various insurance providers. The premium rate is calculated taking the following factors into consideration: your car’s age, the Insured Declared Value (IDV), the terrain on which you will drive the car, the make and model, the displacement provided by your car’s engine, and its current condition.

The below table will provide you with an overview of Grand i10’s ex-showroom price, cost of car insurance premium, Insured Declared Value, and zero depreciation add-on for some of its car variants.

Even though certain scenarios are not included in your insurance premium, you can have them covered by opting for various add-ons at an additional price.

With PolicyX’s hassle-free process, you can easily renew your Hyundai Grand i10 car insurance policy. All you have to do is scroll up on this page and find the form on the right-hand top corner. The next few steps from the form are easy to follow:

1. Where can I compare car insurance quotes for my Hyundai Grand i10?

You can compare your car’s insurance quotes online right here on policy.com.

2. Can I choose to auto-renew my Grand i10’s car insurance?

No, there is no option to automatically renew your car insurance, and it must be done manually online or offline with your insurance provider.

3. My Grand i10’s engine seems to have been damaged due to gearbox malfunction. Can I claim insurance for its repair?

No, damage caused to your car’s engine is not covered unless you have an Engine Protection add-on.

Your car insurance will only cover brake failure in case the damage was caused due to collision. However, if the same was due to wear and tear, the insurance provider will not accept the claim request.