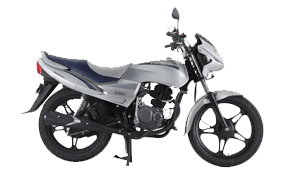 LML (formerly Lohia Machines Ltd) is a defunct Indian scooter and motorcycle manufacturer formerly based in Kanpur, Uttar Pradesh. In 1984 the LML Company signed a technical collaboration agreement with Piaggio of Italy and a scooter project was set up. LML's joint venture with Piaggio ended in the year 1999. But, even after that LML continued to manufacture the Star, a steel-bodied scooter that too with a twist-shift 4-speed manual transmission and a 150 cc two-stroke engine.

In the year 2008, the Star Deluxe was re-introduced to the UK market as the Euro 3 emissions compliant model. LML Freedom is the only bike that is introduced by the LML company, in two variants DX and LS otherwise it has only launched various scooter models in India so far.

The LML Freedom DX has modern features and it is well equipped to go head to head with other competitors from the commuter segment. The body shape of the bike remains the same; however, the company has given the bike a new two-tone color paint scheme. For the comfort of the rider and the pillion, LML Freedom DX has a good and quite wide seat with a nice sitting posture, a raised handlebar with good grip and footrest at good positions for the comfort of the rider.

The LML Freedom DX has a halogen bulb headlamp that gives a stylish feel to the bike. The bike has introduced the dual-toned color scheme and the silencer of LML freedom DX is designed with chrome guard. The bike has an option of an electric start as well as kick and black painted engine. The bike has a side stand with gear lock, dynamic dipper; black powder coated front forks, 18-inch black alloy wheels, and a new tail lamp.

The speedometer boasts of LEDs to indicate economy and power modes to keep the rider informed about the best fuel economy he can achieve. The company claims that the seats of the bike get a better padding to increase the comfort level for both the rider and the pillion. It is available in beautiful shades which includes colors like Moon Silver and Champagne Gold.

The bike is Equipped with great safety and superior comfort, LML freedom has become a popular bike model among young Indian bike users. The attractive looks and beautiful body lining of Freedom DX have made bikers feel crazy for it.

The LML Freedom DX has an analog fuel gauge and speedometer along with a low fuel indicator. The new LML Freedom has a length of 2010mm, the width of 725mm and height of 1080mm as its dimension and has a curb weight of 119kgs, good ground clearance of 165mm, large wheelbase of 1235mm and a fuel tank capacity of 12.5L.

The bike has Keihin PB18 type carburetor, along with unique T- control tubular type chassis, a 12V, and 2.5Ah battery. Freedom DX has multiple- oil-bath type clutch, a 12V DC horn, C.D.I ignition and a mileage of 65kmpl which suit the rider during the journey.

It has mechanically expanding shoe type drum brakes on both its wheels. The LML Freedom DX has a 109.15cc, Air-cooled, four strokes, single cylinder, and two valve engine. The bike has a four-speed constant mesh manual gearbox transmission. It has a top speed of 95 kmph with a bore and stroke of 53mm and 49.5mm respectively.

The suspension system of the Freedom DX is a hydraulic telescopic fork with 100mm stroke at the front and adjustable 5-step chrome plated helical springs at the rear which is preferred by the customers.

LML Freedom is the only motorcycle produced by this company. Otherwise, LML has only launched scooter models in India so far. Variants of LML Freedom DX are –