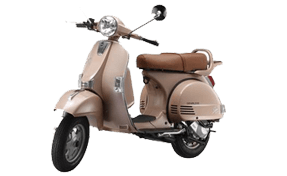 Lohia Machines Privates Limited (LML) was incorporated in the year 1978. Initially, the company engaged in the manufacturer of the synthetic yarn machine. In 1984 the LML Company signed a technical collaboration agreement with Piaggio of Italy and a scooter project was set up. The LML Select was launched in the year 1993, with new technology and aesthetics, and this venture became a great success.

LML's joint venture with Piaggio ended in the year 1999. But, even after that LML continued to manufacture the Star, a steel-bodied scooter that too with a twist-shift 4-speed manual transmission and a 150 cc two-stroke engine.

In the year 2008, the Star Deluxe was re-introduced to the UK market as the Euro 3 emissions compliant model. LML is a well-known name in the motorcycle world. LML is currently available in a couple of derivatives, the range-topping of which is the Star Euro 200, it is loved by the youth.

The front of the Star Euro 200 comes with an elongated nose at the center, the bottom of comes with chrome garnishing to highlight its retro charm. The rectangular turn indicators at the sides of the front apron are clear lens units. The body colored front fender, like the front apron, is an all metal unit. The side profile of the Star Euro 200 comes with rounded side panels which remind the customer of the scooter’s old yet charming appeal. The rear has a large tail lamp, clear lens turn indicators on the back of the rounded side panels and absence of pillion grab rail.

The company ensures the safety of the rider and the body of the scooter is made up of strong and reliable metal. The round rear view mirrors are finished in chrome and it enhance the appealing look of the scooter.

The engine of the Star Euro 200 is capable enough to pump out 9.25 PS of power and 19.9 Nm of torque. The engine is mated to a four-speed gearbox, which makes this the only geared scooter on sale in India currently. The engine has single Cylinder, Four Stroke, Forced Air Cooled With Single Overhead Cam And Two Valves It has come with an overall dimension of 1760 mm in length, 695mm in width, 1110mm in height along with a wheelbase of 1245 mm. Its ground clearance sits at 160 mm that offers a smooth ride. The company has equipped it with 89 x 251 mm interchangeable tires at both, front and rear ends. The scooter is integrated with safety features like digital speedometer, tachometer, and odometer.

The scooter shares most of its interior body dynamics equipped with various reliable features such as hydraulic dampers and helical springs at both ends. The machine has a neatly chiseled fuel tank that has 5.5 liters of capacity along with a 1 liter of reserve capacity.

LML is well known for its ultimate scooters. The LML scooters have proved its efficiency and power by providing commuters a better commuting experience. Following are the variants of LML NV stroke-