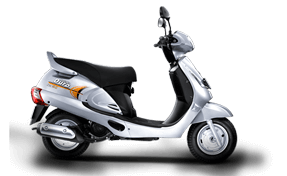 Mahindra Two Wheelers Limited (MTWL) was established in 2008 after the parent company Mahindra & Mahindra Limited acquired select assets of Kinetic Engineering. Headquartered in Pune, Maharashtra, it is a group venture owned by M&M and is known for manufacturing scooters and motorcycles.

For the development of its scooter line-up, MTWL partnered with Taiwan based Sanyang Industry Company (SYM) and Italy-based 'Engines Engineering' which provides research and product design based support.

The company has a production unit at Pithampur, Madhya Pradesh and a research & development center at Chinchwad, in Pune. n 2011, MTWL became the first Indian company to participate in FIM Moto3, Motorcycle Racing Championship. Mahindra Two Wheelers launched one of its crucial models in the 110cc bike segment, Centuro in July 2013 followed by its game-changing model, Mojo in 2015.

The Mahindra Duro is one of the few scooters in the Indian market to have a 125 cc engine. The Duro has been on sale for a few years now. It was upgraded a while ago with a new variant called the Duro DZ. The Mahindra Duro, with loads of space, offers practicality combined with respectable performance and a competitive price.

Mahindra Duro has the brand new design of its clear-lens headlight looks sleeker and provides better road illumination, and the bike’s front mudguard has been modified to make room for the telescopic suspension. The front of the Duro is certainly pleasing and catchy. Its higher-than-average ground clearance, the bike is able to glide over bumps and uneven road surfaces with ease.

The Duro features an extra-large fuel tank, capable of storing up to 6.5 liters of fuel – a welcome feature that reduces the number of fill-ups needed. It has front and rear tires are of 3.5” x 10, and the wider wheelbase and tires improve the bike’s stability and handling, while its MRF Zapper tires give great grip on a variety of surfaces.

Mahindra Centuro now offers 130mm brakes at the front and the rear. These are competent, providing solid stopping power, and the levers feel capable and balanced. Mahindra Duro is available in colors like:

The Mahindra Duro employs a step-thru body style, which simplifies getting astride the seat and off it. The seats are big and supportive and offer a comfortable ride to the riders of all age. The ergonomics offered is that of a typical scooter, with a feet-forward upright seating posture.

The Mahindra Duro, with loads of space, offers practicality combined with respectable performance and a competitive price. The Mahindra Duro gets both self and kick-start and drum brakes on both wheels which ensure the safety of the rider.

Mahindra Duro has redesigned instrument console has been well thought out for usability, with all instruments clearly laid out and easy to read at a glance. On the speedometer, the economy-riding zone of 30kph to 50kph is marked out clearly in green to encourage efficient fuel usage, and the fuel gauge is displayed prominently to the right of it.

The control levers are comfortable to use and feature a brake-locking clamp, and there are push-to-cancel functions.In this, Storage is another area in which the scooter excels. The scooter’s under-seat storage has a capacity of 20 liters, which is among the largest in its market segment. This is in addition to generous front storage.

The seat is wide and well positioned, with a standard upright position characteristic of scooters of this class. Mahindra Duro has raised handlebars certainly help to accommodate riders of varying sizes and give them a greater feeling of control. The bike’s handling is generally very good: it corners well, although its lightweight feel means that it can feel unstable during leans.

This is a very famous scooter in India. The high set handlebar features a large traditional analog instrument cluster. The Duro gets both self and kick-start and drum brakes on both wheels which maintain the safety of riders on road. The Mahindra Duro is powered by a four-stroke 124.6cc engine which produces 8bhp and 9Nm of torque, through a variation controlled, automatic gearbox.