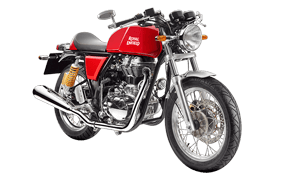 Royal Enfield’s traces of foundation go back to 1893 when the company was known as Enfield Cycle Company. Enfield Cycle made its first motorcycle in 1901 and in the following years it rolled out the iconic Bullet model. The bullish motorcycle was hand-picked by the Indian government to be used by Indian army and police for patrolling Indian border. To assemble Bullet locally, Redditch Company partnered with Chennai based Madras Motors and Enfield India was born.

By 1962, Enfield of India acquired all the machines requisite for building components in India and began to produce all required components locally. The British origin motorcycle manufacturer is now owned by Indian automaker, Eicher Motors, the merger took place in 1994 and since then it is renamed Royal Enfield India.

The Royal Enfield Continental GT car racer was first unveiled at the 2012 Delhi Auto Expo and from then became a sensation with the Royal Enfield lovers. The bike retains the retro looks and is an all-new bike from RE after a long time. It gets a double down tube chassis while retaining the engine of the Classic 500, with a few changes of course

The retro-looking Continental-GT has been built from ground-up and gets the double-downtube chassis instead of Royal Enfield’s traditional single down tube chassis. The Continental GT is the fastest and lightest single-seater motorcycle from the Royal Enfield.The braking system of the bike has single discs front and rear, and ABS is a standard safety feature that is preferred by the riders.

Royal Enfield Continental GT has a 500cc engine and now with increased cubic capacity for the new Continental GT. It is powered by a new 535cc engine with a lighter flywheel and re-mapped ECU. It has long seat which is of course quite comfortable and gives you nice under- thigh support.

Few features like rear set foot-pegs and clips on handlebar completely comfortable. The footpegs fold your legs in such a manner so that your knees can firmly stick around its fuel tank. The low positioned clips on handlebar require you to bend forward which not only improves its aerodynamics but also gives you a clear view of roads. The firm palm grip and electric start also add to your comfort as well.

Continental GT comes with two naked circular dials in its instrument console with chrome surroundings. The left dial of the bike houses its analog speedometer and odometer while the analog tachometer is placed on the right side. Other indicators can also be seen these dials.

Continental GT features a powerful headlight and pass button which provides you a clear vision of roads at night and thus confirms your safety. The wide rear tire also catches your attention instantly. There is also a blue back-lit LCD display which displays the odometer and fuel gauge.