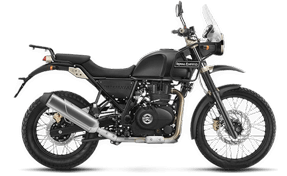 Royal Enfield’s traces of foundation go back to 1893 when the company was known as Enfield Cycle Company. Enfield Cycle made its first motorcycle in 1901 and in the following years it rolled out the iconic Bullet model. The bullish motorcycle was hand-picked by the Indian government to be used by Indian army and police for patrolling Indian border.

By 1962, Enfield of India acquired all the machines requisite for building components in India and began to produce all required components locally. Eicher Motors, the merger took place in 1994 and since then it is renamed Royal Enfield India.Royal Enfield has launched the new Himalayan Sleet Edition in the country.

Royal Enfield Himalayan comes with a standard round headlight at the front and a raised mudguard for further prevention of dirt into the headlight unit. It has a huge wheel at the front whereas the rear can be called fat instead of calling it as huge.

Himalayan is a purpose built bike, it uses no panels at either of the sides and provides a neat LED tail lamp. The exhaust design is the best thing a person can see when seen from the right side of the motorcycle. The Himalayan weighs 182 kg. It gets a clean 220 mm of ground clearance, even after having a comfortable seat height of just 800 mm. It has a long 1465 mm wheelbase. It measures 2190 mm in length, 840 mm in width and 1360 mm in height as well.

The front of Himalayan gets 41mm telescopic forks with an extended 200 mm of travel for ease while off-roading. The tires are rough and huge this time, which makes this ride best for off-roading. The front tire is 90/90-21 whereas the rear uses a 120/90-17 tire with spoke wheels on both ends as well.

Royal Enfield Himalayan is powered by a newly developed, single cylinder, air-cooled, 411 cc engine producing 24.5 Bhp @ 6,500 rpm and 32 Nm @ 4,000-4,500 rpm The Himalayan get the 5-speed manual gearbox and comes with carburetor fed fuel assembly. Surprisingly, the RE Himalayan uses an only electric starter, thereby making the bike's electrical much more reliable than the older models.

Royal Enfield Himalayan has a great combination of digital as well as analog instrument console to the Himalayan. The bigger dial gets analog speedometer at the top and a screen in the bottom area. On the right is a beautiful tachometer, placed above the analog fuel gauge and apparently a digital compass on its right It comes with an excellent fuel tank design and a step up design with the divided seat.

According to Royal Enfield, the half-duplex cradle frame of Royal Enfield Himalayan is robotically welded for precision and strength which are preferred by the riders.

It is unusual to witness a modern machine which is such large and clunk, having tube joining at the headstock. It has a frame design which keeps the weight of bike close to the center of gravity.

One will experience best industry-leading services, coverage, and support. It’s why riders should trust the insurer to help and protect them and their bikes. The standard features that are including when you opt for Royal Enfield Himalayan Bike insurance are: