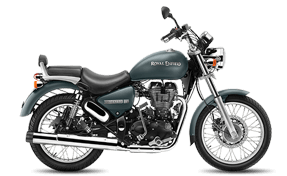 Royal Enfield’s traces of foundation go back to 1893 when the company was known as Enfield Cycle Company. Enfield Cycle made its first motorcycle in 1901 and in the following years it rolled out the iconic Bullet model. The bullish motorcycle was hand-picked by the Indian government to be used by Indian army and police for patrolling Indian border.

By 1962, Enfield of India acquired all the machines requisite for building components in India and began to produce all required components locally. The British origin motorcycle manufacturer is now owned by Indian automaker, Eicher Motors, the merger took place in 1994 and since then it is renamed Royal Enfield India. The Royal Enfield Thunderbird 350 shares the same mill as the Classic 500. The Thunderbird 350 is powered by a 499cc single cylinder mill that produces 27.2bhp.

Royal Enfield Thunderbird 350 looks similar to the outgoing model but there are slight changes which add fresh appeal to this bike.It has projector lamp in its headlight which lacks visor and front cowl.

The naked appearance gets enhanced by the chrome finished side indicators and instrument console. It has steel framed engine is placed below the fuel tank which gets connected to a long chrome finished silencer. Royal Enfield has cut down the size of its rear fender and now features a new stylish LED tail light.

The chain sprocket of this Thunderbird also moves to the right side while it sports a new rear disc brake on the left side. Thunderbird 350 has a wheelbase of 1350 mm which gives it stability around corners and at high speeds. It has a high ground clearance of 140 mm helps you while turning this heavy machine (192 kgs) at slow speeds.

Thunderbird 350 now comes with a compact front fender which comes well with the multi-spoke rim of this bike. In Thunderbird 350 when you see the side of this bike, you will notice new up gradations like new paint finish for its fuel tank and side panels. Thunderbird 350 has powerful projector lamp confirms safety while driving at night as it offers a clear vision of roads. Thunderbird includes pass button and brake calipers on both wheels as well which is loved by the riders.

The left dial has an analog speedometer while it also has a blue colored LCD for its digital odometer, 2-trip meter, clock, and fuel gauge. The right dial of this bike has an analog tachometer and all essential LED indicators.The bike also features new split seat with new backrest for the pillion rider. Royal Enfield Thunderbird 350 offers a high seating riding posture with the up-raised handlebar. This handlebar allows your elbows to stay in a relaxed position and also offers you a firm palm grip.

The Royal Enfield Thunderbird 350 feature a teardrop-shaped fuel tank, digital instruments and fuel gauge and a projector headlamp. The Thunderbird 350 uses a single cylinder, 4 stroke, and Twin spark engine 19.8 bhp of power at 5,250rpm and 28Nm of torque at 4,000rpm. This air-cooled unit is mated to a 5-speed constant mesh gearbox is loved by the commuters.