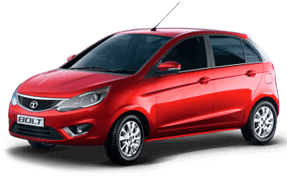 Bolt is a 5-door hatchback that is produced by the Indian automobile manufacturer Tata Motors. It marked its debut at the 2014 Indian Auto Expo along with its sedan version called Tata Zest. It later hit the Indian market in January 2015. It was built on the existing Tata X1 platform, similar to that of Tata Vista and Tata Manza. It was assembled in Ranjangaon, Pune. However, the car's production ceased in April 2019. It is compared with the likes of Hyundai Grand i10, Maruti Suzuki Swift, Volkswagen Polo and Hyundai Elite.

With two engine variants to offer, the Tata Bolt comes with a 1.2-litre Turbocharged MPFi Revotron petrol engine and a 1.3-litre 4-cylinder Common Rail Direct injection diesel engine. Where the former generates 1193cc of displacement, maximum power of 89bhp and peak torque of 140 Nm, the latter produces 1248 cc of displacement, 74bhp of maximum power and 190Nm of torque.

It is a rear wheel drive that comes with only manual transmission. It is paired with a 5-speed gearbox.

In terms of performance, Tata Bolt offers mileage that is 66% better than any other hatchback. The petrol variant provides 17.6 km/l of mileage and the diesel variant provides that of 23 km/l. It comes with 44 litres of fuel tank capacity. It can attain a top speed of 154kmph and takes about 17 seconds to accelerate from 0-100kmph of speed.

*The values are calculated on the basis of the city (Bangalore) and year of registration (Till March 2019).

In order to include some of the above exclusions as part of your Tata Bolt car insurance, you can opt for additional cover. These can be purchased at extra cost.

On PolicyX.com's portal, you can easily renew your Tata Bolt car insurance without any hassle. You can begin right away by scrolling up on this page and finding the option to Get Instant Quotes. The next few steps required you to do the following:

1. Should a part of the claim be borne by me as co-payment under Zero Depreciation add-on?

Yes, you may have to bear an additional co-payment of some percentage of the assessed claim amount under Zero-Depreciation cover. This may vary from insurance companies to companies.

2. Is there any limit to the number of times I can claim under Zero Depreciation cover?

Yes, you can avail the benefits under Zero Depreciation cover for only a specific number of times per policy year (as per the terms in your policy).

3. I am military personnel who is working in a Forward Area. Can the period of 90 days before expiry date be extended for me to avail my No Claim Bonus?

Yes, in case of military or paramilitary personnel working in Forward Areas, the period of 90 days may be extended by your insurance provider up to 365 days. This, however, must be availed with a declaration in writing by the policyholder that the vehicle was not used during the interim period.

4. Is there any limit to the claim of repairs made at the location of breakdown under Roadside Assistance add-on?

You can only claim for the minor repairs that are carried out at the side of breakdown provided it requires no spares and takes less than 45 minutes of labour time.

5. Can I claim for the medical expenses under Roadside Assistance add-on?

No, you cannot make a claim under the add-on. The insurance company will, however, arrange for the telephonic contact details of the nearest available medical centre.