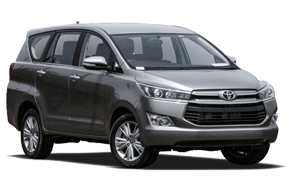 Toyota Innova, manufactured by the Japanese automobile giant Toyota, is a compact MPV. Initially produced in Indonesia, it is known as Toyota Kijang Innova in that country and Toyota Innova in others, including India. It is said that the word Innova is derived from the English word "innovation". Launched in the year 2004, Toyota Innova was sold in large numbers as a MUV in India. Today, it is known as Innova Crysta, which is the second generation available in twelve variants. It was upgraded in the year 2016. Some of its closest MPV rivals are Tata Hexa, Kia Carnival and Mahindra Marazzo.

Powered by 2.4 litre GD diesel engine, the Toyota Innova produces the maximum power of 147bhp and torque of 343Nm. The 2.8 litre petrol unit, on the other hand, produces 171bhp of maximum power and 360Nm of torque.

Considering the vehicle is known for its space, the MUV has a foldable seat that can be used as a table on the back for keeping a small laptop. Where the front and second row are spacious, the third row is enough to accommodate two adults, leaving a little less space for the third occupant. Nonetheless, this vehicle is available as both 7 and 8 seat layout.

Equipped with a myriad of features, this MUV apart from its spacious interiors is also popular for its exteriors that have a chrome finish front grille. It also has automatic projector headlamps, ambient illumination, cooled-glove box, airbag, back monitor, child restraint system, clearance and back sonar, and a 4.3-inch TFT multi-information display that comes with a DVD player.

Toyota Innova's car insurance premium rates may vary amongst different companies. This is because several factors are taken into consideration when adding up to that cost. This includes your Innova's age, the make and model, the condition it is in, the terrain you will drive-in, its Insured Declared Value (IDV), and the displacement it provides.

Refer the table below to get a brief idea about how the IDV and the premium rates of your Toyota Innova are going to be.

Some of the excluded benefits can be a part of your car insurance policy using add-ons. These can be included at an additional cost. Some of them are:

You can renew your Toyota Innova's car insurance within minutes on PolicyX.com. To begin now, scroll up on this page and find for the form on the right-hand top corner. The next few steps from there are easy to follow:

1. My Toyota Innova is 6 years old. Can I purchase an Engine Cover add-on to protect it against engine damage?

No. Most insurance companies do not offer this cover for cars that are more than 5 years of age.

2. Will I have to pay extra even if I have Zero depreciation add-on cover?

Zero Depreciation add-on does not offer 100% coverage. Hence, every policyholder must shell out a percentage of the claim, which is called compulsory excess.

3. Can I transfer my NCB Protection add-on along with my NCB discount?

No. You can only transfer the No Claim Bonus to another car or policyholder and will have to purchase the add-on again for the other car.

4. My Innova's backseat caught fire and is damaged to a great extent. Will the replacement get covered under my insurance?

Yes. Your car insurance will cover the damage caused to your backseat due to fire.