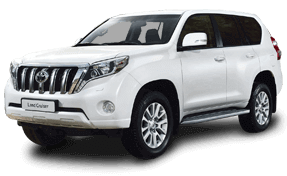 Toyota Land Cruiser is a luxury SUV produced by the Japanese automobile giant Toyota. With its first production as a jeep-like vehicle in the year 1951, it is known to be the longest-running series of models by Toyota. In comparison with SUVs across the automobile industry, the Land Cruiser stands second in line for being the longest SUV series in the running behind the Chevrolet Suburban. The 2019 Land Cruiser now competes against Land Rover Range Rover Sport, Audi Q7, BMW X7 and Mercedes-Benz GLS.

The Land Cruiser 200 is the only variant of the Toyota Land Cruiser model. It comes with a 4.5-litre twin-turbo V8 diesel engine consisting of 8 cylinders and 4 valves. It manages to develop a maximum power of 261hp and torque of 650Nm and is linked to a six-speed automatic transmission unit. Furthermore, the engine provides a displacement of 4461 cc.

When addressing the Land Cruiser's performance, it is believed to provide 10% better mileage than any other SUV. With a fuel tank capacity of 93.0 litres, the SUV gives a mileage of 11 km/l as per ARAI. In order to attain 100kmph from 0kmph, it takes about 9.2 seconds and can touch a maximum speed of 190kmph.

The premium rates for any car's insurance differ when compared between various insurance providers. Same goes for Toyota Land Cruiser car insurance as several factors will be taken into consideration to add up to that cost. Your car's age, its make and model, its current condition, the terrain on which you will drive it, the Insured Declared Value (IDV), and the cubic capacity of your car's engine are some of the major factors involved.

Refer the table below for an estimate of your Toyota Land Cruiser car insurance's premium rate, IDV and the cost of Zero Depreciation will fall in.

Paying extra on your basic premium will help you include some of the exclusions as part of your comprehensive car insurance policy. These exclusions come in the form of add-ons, such as:

If you wish to renew your Toyota Land Cruiser's car insurance, then look no further than PolicyX.com. To get started right away, scroll up on this page and look for the form on the right-hand top corner. The next few steps from there are:

1. My Land Cruiser broke down in the middle of nowhere. It was towed to the nearest garage for the repair that needs 5 days. Will the Daily Allowance add-on my travel expenses?

Your Daily Allowance add-on is only applicable if the garage is an authorized garage.

2. My Land Cruiser was damaged while I was teaching my son how to drive. Can I claim insurance for the repairs?

Since your son does not hold a driver's license, any claim made for the damage caused by him will not be accepted by the insurance provider.

3. I consumed alcohol as per the permissible limit before driving my Land Cruiser. However, it got damaged due to an accident. Will my claim be accepted?

No. Irrespective of the amount of alcohol consumed, your claim will be rejected on the grounds of drunken driving.

4. Can I claim insurance for the damage caused to my car due to an accident outside the geographical area specified in my insurance policy?

Your claim will be rejected if the damage was caused outside the specified geographical area.