Identified as one of the most economical and a less famous payout program, the National Pension Scheme is the approved deal by the Government of India. With an annual contribution of 6000 INR as a minimum amount, citizens from the age group 18-60 can opt for the NPS.

The plan provides flexibility to pay the entire premium amount at once or in 12 installments throughout the year.

Cost-Effective Plan For The Retirement

Counted as the cheapest investment plan, the NPS is a linked plan for your retirement. Pension plans have been ignored by most millennials for a long time. However, with the growing popularity of other private and government schemes, NPS was the least chosen option.

It is not uncommon that saving for the post-retirement age is a necessity and a regular income at the end of the month is a need to maintain the standard of living. Thus, an initiative such as the NPS allows citizens and potential customers to build a habit of saving and accumulate a lump sum amount to ensure regular payouts after the work-life has reached an end. 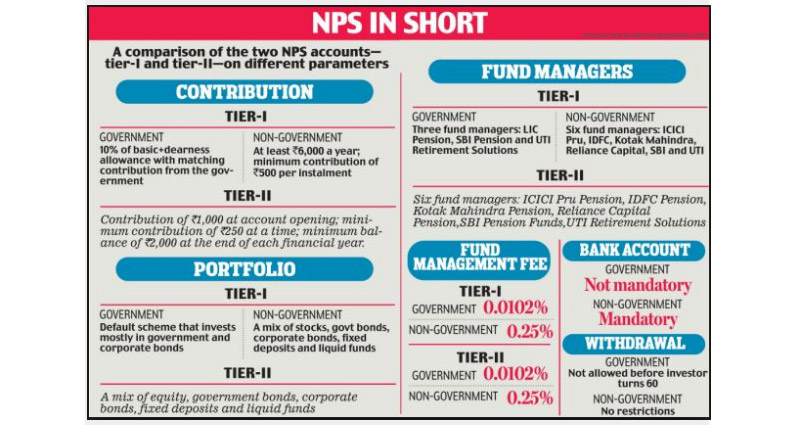 Important: NPS or Pension Plans – Which One Should You Opt For

Initially rolled out as a government employee’s only scheme, NPS was eventually made accessible to the citizens across the nation. Cost-effective and simple are the bonus features of the scheme. It is available in two types of accounts

A basic and general pension account, it comes with its pros and cons. The major drawback being, limited withdrawals from the account of the holder. As per the terms and conditions, the policyholder is eligible to draw only 20% of the amount. The rest of the amount, which is 80% of the deposited amount, has to be used for buying an annuity from a life insurer. This is done to ensure that the entire insured income is paid until the plan had matured or the death of the policyholder. Not only this but after attaining the age of 60 also the contributor is eligible to withdraw only 60% of the total amount. The rest of the amount has to be insured again by insurance companies. It resonates most with the non-withdrawal account where the deposited principal is meant for retirement only.

To simplify the transaction deals and cons, Tier 2 accounts were introduced to the NPS. It is one of the voluntary savings account options where the contributor is eligible to make endless withdrawals from the account. This account provides no tax benefit to the account holder under the Income Tax Act. This account requires a minimum balance of 2000 INR to be maintained at the end of every year.

The NPS is largely regulated by the PFRDA or the Pension Fund Regulatory and Development Authority which is an autonomous body. This body can choose fund managers to utilize the amount deposited by the investors in the NPS. The entire amount is split into Equities, Commodities, and Securities to be recuperated as assets.

The investors have a say in the kind of the portfolio of the investment that goes into the scheme. Hence, it has been mandatory to choose from the fund managers while the investors open an account.

In the case of Tier 1 accounts, the contributed amount in the scheme is 10% of the basic salary in addition to the dearness allowance from the employee and the employer. Government bonds have the flexibility to pay it directly, so do corporate accounts. Non-government funds are further invested in the form of stocks, bonds, fixed deposits, liquid funds, etc. Tier 2 accounts, on the other hand, have a flexible investment dynamic. It can be a mix of bonds, stocks, funds, deposits, etc.

As mentioned earlier, the NPS is an economical and cost-effective strategy. An intermediary cost which is usually 0.25% of the total investment, has to be paid for fund management. The low intermediary cost has been one of the major reasons; the NPS was not advertised initially with zeal. However, times have been changing, and more people are becoming aware of the benefits of NPS. It gives investors a competitive edge over ULIP and Mutual funds where the fund management cost is 1.35 % and 1.25% respectively.

When the investor selects a fund manager, it is most likely to depend on the extent of risk that they are willing to take. Equities have been known to generate a return of at least 3.79% and the risk level of any large-cap equity fund. Bonds have recorded the largest return on investment and range from 8-9%. The risk for bonds largely depends on the kind of organization and is usually low compared to Equities and Central Government bonds which have been known to return 6% of the investment amount.

Depending on the investment portfolio, the scheme has its own set of benefits and setbacks.

It largely depends on the investors to decide whether they want to choose for a cost-effective NPS or expensive mutual fund investment.