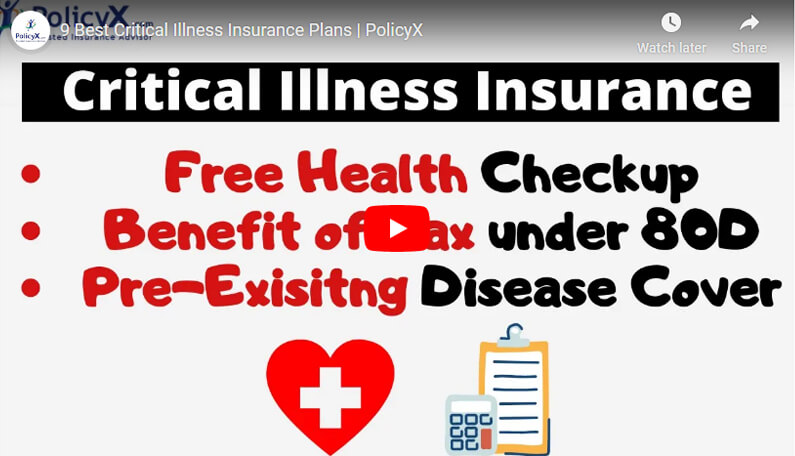 There are two types of Critical Illness Policy and the same has been explained further:

Here all the plan benefits will be only offered to an individual. The features and benefits of the plan will be limited to a single person.

This plan caters to the healthcare needs of an entire family. All members are covered in the plan and can apply for a claim as per the TnC's of the policy.

Below is the list of best critical illness insurance policies of 2019-2020 in the Indian market. The appreciable benefits, features, sum insured options and the coverage makes these plans stand out in a crowd:

The table mentioned below will make the plan comparison a super easy task for the policy buyers. The table contains data and facts as per 2019-2020.

A Brief Description Of The Above-Mentioned Plans 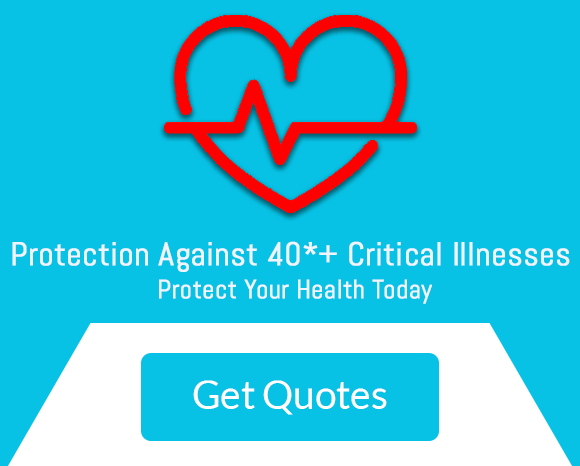 Here is a list of exclusions that are common to all the critical illness plans discussed previously.

Any illnesses or medical conditions not listed in the policy documents.

Any critical illnesses directly or indirectly associated with HIV/ AIDs.

Any treatment or surgery for change of sex.

Any treatment arising from or traceable to pregnancy.

Any medical condition arising from the donation of any of the policyholder's organs.

Any disease arising due to self-inflicted injury or suicidal attempt.

Here is a list of facts that you should look for in the plans if you have made up your mind to buy a critical illness plan:

The sum insured should be decided by the buyer after analyzing all the requirements. But in case of critical illness, it is a bit challenging. The occurrence of any of the critical illnesses in the family history makes one more prone to these life-threatening diseases. So, think and then finalize.

Finalize a list of your demands & compare the plans with respect to benefits, features, hospitalization facilities, etc. Whichever strikes you the most should be your preference.

It is necessary to check whether the premiums fit into one's pocket. The policy will be only running till the time you are paying the premiums. So, go for a plan that you can afford.

How Can You Buy A Critical Illness Insurance Policy?

Visit the 'free quote' section present at the top of this page.

Fill some basic details & click on the tab 'Continue'.

Compare quotes & choose a plan that suits your requirements.

Fill the proposal form that requires some necessary information.

Upload your documents online & make the payment via selected modes.

How To Go About The Claim Process?

A claim can be made in two ways- a cashless claim or reimbursement claim. The cashless claim facility can be availed only at the network hospitals of the third party administrator (TPA).

Which Documents Are Required To Purchase Critical Illness Plan?

A list of documents have been presented which can be required at the time of buying a critical illness policy:

1. Can I make multiple claims for the same illness or any other critical illnesses that are listed?

During the policy period, you are allowed to make only one claim on any of the listed critical illnesses mentioned in your policy document.

As soon as you make a claim, the lump sum amount shall be paid out for the particular critical illness. The policy would be automatically terminated and subsequent renewals would be allowed in the policy of the particular insured person. If at all the policy has been issued to more than one individual then the policy shall still remain active for the other policy members.

Certain insurance policies continue other benefits except for the one which you already made the claim.

If you are making a critical illness claim then the hospitalization expenses incurred will be paid under Health Insurance. The Lump sum benefit will be paid after the survival period under Critical Illness cover.

It is always better to speak to your insurance company about this clause as some insurers may allow you to make more than one claim.

2. I want to understand how is the premium determined for critical care plans?

Premiums for critical care insurance are determined on the sum insured stated in the policy document, the complete policy tenure, gender, and health status of the insured person.

The premiums vary from one individual to another depending on all these factors mentioned above.

3. Is it better to take critical illness cover or health insurance?

4. Can I change the sum assured during policy tenure?

No, you cannot change the sum assured during the policy tenure.

5. Do I get any tax benefits under this policy?

Yes, the premiums that you pay for your critical illness insurance cover qualifies for an income tax deduction under Section 80D of the Income Tax Act, 1961.

Find Out What PolicyX Customers Says

Good health insurance for people with comorbities at affordable prices. I am glad that Star insurance accepted me despite my numerous comorbities. Go for it.