If we talk about the core reason for purchasing any insurance, we can say that it is a backup plan for your bad days. Any wise man would prefer securing his bad times and dependents by creating a backup plan for it. Though insurance covers our unforeseen circumstances, it can become an expensive affair with time in the name of ‘loading’. The concept of ‘loading’ followed by the insurance companies is something about which most of the policyholders are unaware. 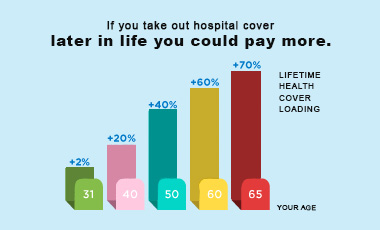 For instance, suppose a healthy individual is paying his/her insurance premiums on time. But due to an unfortunate event s)he gets hospitalized because of a heart attack and the insurance company readily covers his/her expenses up to the limit promised. However, despite maintaining the policies and providing the amount on time, the insurance company will give him/her another shock at a later stage when (s)he will pay his/her premium, as (s)he will see that it will now be revised to a higher amount. This is what is called ‘loading’.

For instance, Rahul Verma purchased a health insurance policy a few years ago from a leading insurance company. During an initial couple of years, Rahul was very satisfied with it as the company readily honored his claim for the expenses he incurred when he had sudden heart surgery. But surprisingly, when his renewal is due, Rahul was shocked by the increase in premium. Further to his inquiry, he was informed that the reason behind this sudden increase was ‘loading’.

Loading is said to be an additional amount that is built into the insurance cost. The loading amount is added to the premium of those individuals who are considered to be risky, to provide the cover for their insured amount. In simple words, loading covers the losses that arise from insuring an individual who is prone to a form of risk and the losses for that period are expected to be higher than anticipated.

For instance, two individuals purchased life insurance policies that were the same. However, there was a difference in their premium; For one the premium is higher than another. This difference in premiums is high as compared to the other.

Therefore, the higher the age, the higher will be the loading. Loading comes into the picture when the person insured with a company is comparatively more prone to risk than in ordinary circumstances. Also, the amount of loading applied is different for different individuals.

The life and health insurance plans are generally the products in which loading feature apply. Here we have penned down the factors that might affect the amount of loading applied to a policy, and hence the premium:

Age of the Policyholder

The amount and term of insurance and the type of plan the customer wants are a few factors affecting the premium of a life insurance plan. However, the main factor that determines the premium is the age of the policyholder. This is because as the age increases, the probability of mortality increases and this leads to a significant difference between the premiums For instance, a 20-year-old non smoker needs to pay Rs 464 per month to get a sum assured of Rs 1 crore, while a 30-year old non-smoker will have to pay Rs 665 per month to get the same sum.

Smoking Habit of the Policyholder

Smoking or any other form of contact with tobacco or nicotine is another factor that majorly impacts the amount of loading applied to the premiums. Both health insurance and life insurance premiums for smokers can be almost double the premiums for non-smokers due to an increased risk of smokers getting sick or dying younger. For example, a 20-year-old non-smoker pays Rs 5577 per annum to get a sum of Rs 1 crore, while to get the same cover, a 20-year old smoker pays Rs 9270 per annum.

The medical state of a person is also an important factor when it comes to determining the loading which applies to his/her premiums; especially in case of health insurance premiums. For example, let’s take the case of a group of individuals- healthy and 45years of age. In this scenario, the premiums payable for all the people will be equal because the probability of mortality for all will be the same. However, if one person from the same group was obese, (s)he would have to pay a higher premium than the rest of the people; because there is a comparatively higher probability of his/her organs like brain, heart, and kidney getting damaged.  In this situation, the extra amount of premium charged from this person is what is called loading or medical loading.

Additional factors Affecting The Mortality and Eventually Loading Are

The insurance sector anticipates a certain amount that might be claimed through insurance for a certain period. Till the policyholder remain healthy, (s)he proved to be at a lower risk of claiming his/her insurance. When diagnosed with certain health complexities that could recur (like a heart attack), (s)he is at a greater risk to the company. So to cover itself of losses that could occur from uncertainties of a customer's health, the insurance company charges a higher premium than it would before. The loading is based on the policy holder’s medical history, nature of the job (whether or not dangerous) or hazardous habits.

While it depends upon the case and circumstantial evidence, but loading is justified in some cases, while it might not be in the rest. Nearly all insurance companies are still at a particular age before which one cannot buy an insurance policy. Depending upon the insurer, the maximum age for buying a policy varies from 65 to 80 years. The main reason for applying this ceiling is the difficulty in determining the risk factor which ultimately contributes in determining the premium. It is often seen that the applicants of an insurance policy are already suffering from major ailments such as diabetes, high or low blood pressure, hypertension or asthma. Also, the diseases are accompanied by a few more unhealthy habits, such as chewing tobacco and smoking. Despite having a health ailment, past medical history, and adverse family history, If an insurer is accepting applicants, he would certainly offer the policy on special terms with significant loading.

As mentioned earlier, loading affects both life and health insurance. Firstly when we talk about a life insurance policy, the main factors that would determine the premium to be paid are the term of the insurance, type of policy and most importantly the applicant’s age. This is because the possibility of mortality is higher for an older person, so a 50-year-old will be charged higher than a 20-year-old for the same policy. But the increase in insurance premium for the first three years is not a matter of worry, as the company cannot change it during that period, irrespective of the number of claims made.

Many times a policyholder can see that the premium could be higher irrespective of his/her age. If the applicant is a habitual smoker, obese, diabetic or has a life-threatening occupation, the insurance loading will be higher than that of a healthy individual with an office job, as explained before. The reason for this is that the diseased do hold a higher risk of dying younger or falling sick. Additionally, if an individual lives in a country with political unrest, he/she will be burdened with residential insurance. The basic idea behind loading is that higher the risk of you making a claim, the higher will be the premium charged.

‘Exclusion’ is a term that is used by some insurance policies instead of ‘loading’. Exclusion in an insurance policy means that the person insured can continue paying the same premium, but will not be covered by insurance in certain conditions. For instance, if insurance excludes cancer, the policyholder cannot claim insurance for cancer-related treatment or suppose his/her life insurance does not include death by performing adventurous activities like bungee jumping, your family will not be able to claim any amount in those circumstances.

If we talk from the perspective of an insurer, it covers the losses for a period when it is expected to go higher than anticipated because of a risk-prone customer. Also, it benefits the customers who have a higher risk factor by making them eligible insure themselves. And if the customers with high and low-risk factor pay equal premiums, it would be an injustice to the client who is less prone to risk.

However, we can say that loading is not justified in certain instances for instance, when loading is applied to an individual with a history of surgeries like cataract or hernia. Both of these are easily treatable and have a negligible risk of further complications. So, we suggest you that read your policy well, talk, inquire with your insurer and survey the market well before purchasing any insurance policy.