What You Should Know About Health Insurance Portability?

Who doesn’t like to explore a better option for everything and have an option to switch everything when they get a better option. The same applies to insurance policies. I guess everybody wants to opt for a better deal whenever they get it.

For instance, somebody was left outside the office, waiting for the app-booked cab. And after a 25 minutes wait, (s)he was cheesed off enough to want to order from another app. One can call it fickle-mindedness, but it was just plain bad service lacking accountability!

Similarly, if somebody has been stuck with a health insurer, wanting to change to another for whatever maybe his/her reasons, bad service, lack of options in the current one, strict and non-flexible guidelines, one should feel better to know that (s)he is not at the wit’s end of his/her last straw.

The Meaning of Portability in a Health Insurance Policy

If we talk about the literal meaning of portability, it is something that allows the policyholder to switch between insurers without having to worry about losing benefit like no-claim-bonus or sit out a waiting period that (s)he may have already completed with his/her previous insurer. Health insurance is most important because regulations allow portability only for health policies by non-life insurers. This feature allows the policyholder to move to an individual policy or a family floater, if (s)he's been covered under a group policy until now and decide to change jobs.

Things to Remember Before Opting Portability

This is a proven and most common thing that health insurance is a long term decision. So, a decision that is as calculative as choosing the right policy and then switching to a different insurer comes with a few important points that need to be taken care of. Here is a list of those points penned down by PolicyX: 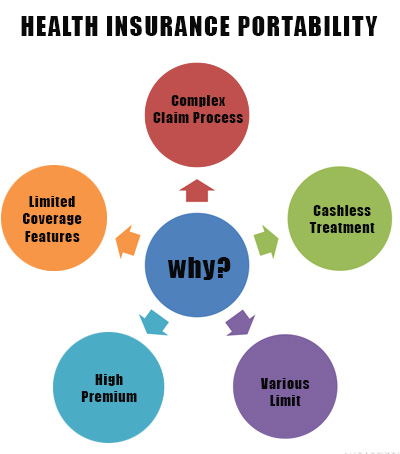 What Can Be Lost in Portability

If we talk about the process to port a health insurance policy, we can say that a person can only apply for portability when his/her existing policy is due for renewal. When the insurance company receives an application from a policyholder seeking portability, it will provide the latter with a proposal form, a portability form, and details of various products offered by it. The insurance company will obtain the medical records and claim history from the existing insurer, once after it receives the filled-in forms. The existing insurer must furnish the details within seven working days through a common data-sharing portal developed by IRDA. Once the new insurer obtains all the details, it will have to decide to underwrite the policy within 15 days. If it fails to do so, it will be bound to accept the application.

You Can Read This - What is Loading in Health Insurance Policies?

How to Port Health Insurance

There are six simple steps to port a health insurance policy:

Although the IRDA has empowered all policyholders with the right of portability, it has also given insurers the right to reject any port-in requests. All requests for portability are treated as new and are subject to scrutiny by the underwriter. The underwriter assesses the risk exposure to determine the premium that needs to be charged. The insurer can reject the proposal if it’s deemed unfavorable. In that case, the policyholder will have no other option but to continue with the existing insurance provider.

There might be people who are unsatisfied with their current insurer and that’s prompting them to look at other options. But before making a call, one has to make sure that (s)he considers all aspects such as sub-limits, no-claim-bonuses, ease of claims procedure, etc. Young people are unlikely to have made many claims and can switch easily as they would come under the non-medical category. Their policy would be ported immediately.

Even if someone is over 45 years with a clean medical history, it’s advisable by the experts of the field to get a thorough medical test done before applying to port a health insurance policy. This happens because if an abnormality is detected, the applicant could stick to their old policy instead of having to face rejection or an increased premium with the new insurer. And since the applicant has already completed any or all of your mandatory waiting period, you can just take additional cover for any ailments that have come up – you’re assured of getting claims from your old insurer who is aware of your health history.

By all means, we can conclude that the portability of your health insurance is an add-on benefit feature that makes you not regret your current policy if the policyholder is unhappy with it. |(S)he can choose and opt for the policy of his/her choice. However, the terms and conditions of the policy will differ from insurer to insurer. The policyholder will have to weigh in those factors before making the switch. People in the ‘high-risk’ category may also end up paying more premiums during the process. Also, if under the previous policy, the pre-existing condition was excluded from coverage for two years, and the exclusion period for the same condition under the new insurer is three years, then the policyholder will have to undergo one-year waiting period. People usually purchase health insurance policies when they are younger. It’s easier and hassle-free because even health insurance companies prefer covering the young and healthy. Therefore, portability will be difficult later in life since a new insurer will not be willing to risk covering an elderly citizen. We suggest you read well if you want to port your existing policy.