The progressive trade policies established and implemented by the consecutive Government in India has resulted in better foreign investment. The Indian Government has been very liberal towards the sustainable growth of India’s economy along with the healthy integration with the world economy.

The Foreign Institutional Investors and Non-Residents Indians (NRIs) have been allowed by the Government to invest in the Insurance sector following an automatic route within the 26 percent cap on FDI (Foreign Direct Investment). It has been previously said by a senior official at DIPP (Department of Industrial Policy and Promotion) that in the third-party administrators, insurance and insurance brokers, the Foreign Investments are already allowed. But now it has been officially redefined by the FDI policy to attract more investors.

The characterization of most of the LDCs is done by a lack of resources which are essential for the economic development of the country. The shortage of resources directly indicates the dearth of savings where the resources can either be domestic or foreign. According to the well-known economists, the scarcity of domestic resources is termed as ‘Saving Gap’ and lack of foreign resources is termed as ‘Scarcity of Foreign Exchange’. In a normal language, such a lack of foreign exchange is called ‘Trade Gap’. Both, the savings gap and trade gap can only be bridged by the foreign capital investment.

It allows a country to invest in other sectors more than it can save domestically. We can say that the resource limitation that obstructs the way of development of LDCs can be removed to a great extent if foreign investment is invited. Also, foreign investment fills up the ‘technological gap’ of the developing countries. The more rapid progress can be brought to poor countries when they get Technological assistance from the developed countries. Which ensures the requirement of foreign investment in the country. Foreign investment brings competition in the country’s market and also brings the latest technology and faster skill accession to facilitate domestic labor. It acts as a platform to pave the way for strong export growth for global production chains.

Post-independence, the Government of India was interested in foreign investment but was having a doubtful and frightened attitude towards it. The indifference of GOI towards foreign capital was shown in the Industrial policy of 1948. The policy implied that the Government of India stands firm by the moderate Indianisation of foreign industries, which resulted in less foreign investment in India.

Afterward, for ensuring the flow of foreign capital in India the GOI had to assure the foreign investors in given three aspects.

The Indian Government kept on liberalizing foreign investment policies since the start of 1956 to attract considerable foreign capital. The permission for the investment in the country is granted to the wholly-owned subsidiaries of foreign firms which was subjected to the agreement to export 100 p.c.or more of their output.

An expanse of Foreign Investment Policies in India

According to a report of the steering group on foreign investment policies in India, the following changes were proposed.

When we talk about India’s economic condition, India stands at the 5th place in terms of its economy in the world and the 3rd place in terms of GDP rate in Asia. India is counted in the few markets in the world that provides a remarkably high probability of growth and earning in effectively all the sectors of the economy. The greatly skilled human-resources plays an important role in ensuring a good profit and return to the foreign industries on their investment in India. A prior judgment about the opportunities and the limitations for investing in the Indian market would be beneficial for foreign investors.

Investors need to have a properly designed investment plan which is designed based on extensive research. The foreign investors must keep in mind that if they are planning for a short term investment then it will not result in any significant profit. However, the long term returns will be guaranteed fruitful to an investor who has researched the market properly before making any investment. If an investor gives all these factors a required consideration, there will be no fret about the result and outcome of their investment.

Types of Foreign Investment in India 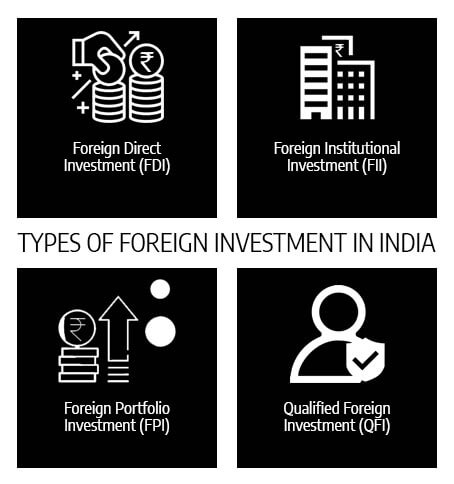 When an investment is made by a foreign company or individual involving either of the given ways then it is called foreign direct investment (FDI):

The main aspect of FDI which makes it different from the other types of foreign investment is that it is a long term investment and includes a strong control over the company policies and company decisions. Further, the FDI is of two types which are:

If a foreign investor procures more than 10 percent of shares of any Indian company then it will be considered as FDI according to the Companies Act, 2013. The logic of the rule is that the higher value of owned shares will consequence in considerable control over the decision making of the company.

When an investment is made by a foreign institutional investor in the shares of an Indian industry or the bonds offered by an Indian industry is termed as FII. For example, we can say that if a foreign investor owns shares in the reliance industry it will be considered as FII. The institutional investors like Investment companies or Insurance funds are eligible to directly invest in the stock market of India subject to the condition of getting a license from SEBI.

Although, to invest in the Indian market a foreign investor has to be registered as a sub-account of an FII and then the FII will be responsible for buying shares/bonds from the Indian market on investor’s behalf. A foreign investor can be registered as a sub-account of an FII in India only if he is wealthy enough to have a minimum of $50 million property or is a high net worth individual (HNIs). The foreign institutional investors are eligible to get back their money from the Indian stock market/bond anytime that is why FIIs are termed as ‘Hot Money’.

An investment made by a foreign organization and NRIs in the secure sectors of the Indian market like shares, Government bonds, corporate bonds, convertible securities, infrastructure securities, etc is Foreign Portfolio Investment (FPI). FPI is flexible in terms of entry and exit from the market.

But, it is important to unlock a DMAT account and Trade account with an agent of depository in India. There are few rules regarding QFI which are: