Mahesh has recently started a business in partnership with his friend. He has used a large portion of his savings and taken loans to start the business. Mahesh’s family comprises of a homemaker wife and two young kids. 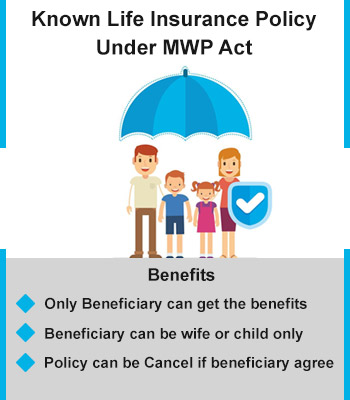 Mahesh understands the enormous risk he has taken onto himself by taking big loans. He knows that in case he is unable to pay his debts, all his assets will be confiscated by his creditors to recover their dues. He does not want his family to suffer in case something unfortunate happens to him before he pays off the entire loans and dues.

Read on to understand about the MWP act and how it helps:

What is The MWP Act?

The Married Women’s Property Act (MWP Act) was enacted in 1874. It was enacted to protect the properties owned by women from their relatives, creditors and even from their husbands. Section 6 of the MWP Act deals with life insurance plans. It provides for any married man (including widowers and divorcees) to take a policy under the MWP act. Each policy under the MWP Act is treated as a special trust.

What The Law Says

How Does The MWP Act Protect Your Wife And Children?

The proceeds of a life insurance policy under the MWP Act cannot be claimed by creditors, relatives (even parents and siblings) or form a part of the will (estate of the proposer). Thus, this is a foolproof way to ensure that the financial future of your wife and children are protected.

You may be thinking, making your wife and/or children as the nominee(s) in your policy will be sufficient to ensure that the proceeds are paid out to them and why should you unnecessarily buy a policy under the MWP Act. However, merely nominating may not serve the purpose.

Who can be the beneficiaries?

How to Buy Life Insurance Under the MWP Act?

The husband has to apply for a policy on his own life. With the life insurance application, he has to submit the MWP addendum/form. The format of the addendum is available on life insurance companies' websites.

The following details need to be provided in the addendum:

If all policy-related requirements are met and the addendum is in order, the policy will be issued as an MWP act policy. ‘MWP act policy’ is mentioned on the face of the policy documents by most insurance companies.

There are no additional charges to be paid for getting a policy issued under the MWP act.

All the benefits are applicable under the policy such as Maturity, Surrender proceeds, Partial Withdrawal, Survival benefits, Paid-Up policy proceeds, and Death benefit proceeds.

No. Once the policy is issued as an MWP act policy, the original beneficiaries mentioned in the addendum cannot be changed or replaced. This feature protects the interests of the beneficiaries. Even if there is a divorce or separation at a later stage, the husband does not have the right to change the beneficiaries.

The husband is the life insured under the policy. He is responsible to make the timely premium payment. However, the benefits will be paid only to the beneficiaries.

Most companies do not permit assignment of policy (transfer of ownership) or policy loans for MWP act policies to protect the interests of the beneficiaries.

Yes, you can buy multiple life insurance policies under the MWP act.

Any type of life insurance – term, endowment, money back, ULIP can be purchased under the MWP Act.

It is very useful to protect the interests of the wife and children of businessmen, self-employed persons, or salaried people with big loans or liabilities.

People living in joint families can make good use of this act to ensure that in case of their demise the proceeds are paid to the wife and children only and other relatives do not claim for it and cause hurdles in the endorsement.

With an MWP act policy, one can be confident that the benefits will be passed on only to the wife and children and third parties or creditors cannot claim it.

Ajay Sharma, a businessman had taken loans to finance his business. He had also purchased a term insurance policy under the MWP Act 1874. His wife was named as the beneficiary. After Ajay’s sudden demise in an accident, his creditors approached the court seeking their right to use the death benefit proceeds of the term plan to settle their dues. As the policy was issued under the MWP Act, the creditors lost the case and the court ordered that the death benefit is paid to his wife.

The policy cannot be assigned. It cannot be used as collateral for loans. Also, all policy benefits will be payable to the beneficiaries and not to the policyholder.

Taking a policy under the provisions of the MWP act does not involve complex procedures or requirements. Yet the number of such policies is less, mostly due to lack of awareness about this act among the salesforce. With more youth going the self-employment way and the government of India promoting entrepreneurship among the citizens of the country, it is important that more and more people know about the MWP act and uses it to protect the financial interests of their dear ones.