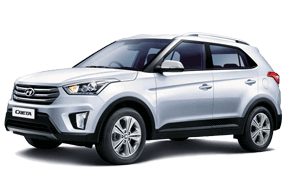 Also known as Hyundai ix25, Hyundai Creta has been produced by the South Korean Manufacturer Hyundai Motor Company since 2014. Hyundai Motor India Limited, however, introduced Hyundai Creta to the Indian market in the year 2015. Since then, this B-Segment car has seen two generations, where the second generation was revealed in the 2019 Shanghai Auto Show and the production was done in the year 2020. It was specifically designed for the Indian market but was subsequently launched in China and Russia. It now goes up against the likes of Kia Seltos, Renault Duster and MG Hector.

The premium of Hyundai Creta may vary among different insurance providers. The price takes your car's age, the Insured Declared Value (IDV), the terrain on which your car will be used, the make and model, the cubic capacity of the engine, and its current condition into consideration.

The below table provides an overview of Creta's ex-showroom price, premium cost, IDV, and zero depreciation for some of its car variants.

In order to cover what has been excluded from the basic premium, one can opt for various add-ons with additional charges.

You can renew your Creta car insurance policy online via PolicyX.com using a hassle-free process. All you need to do is scroll up and find the form on the right-hand top corner. The subsequent steps from the form are easy to follow:

1. I have sold my old car and bought a new Hyundai Creta. Can I continue the No Claim Bonus from my old car's insurance?

Yes, if your old car was an SUV, you can transfer its No Claim Bonus to your new Creta.

2. My Creta is damaged after colliding with an animal on the road. Will the insurance company cover the damages?

Yes, the insurance company will cover the damages done by the accident caused due to collision.

3. Will Roadside Assistance get covered under my Creta car insurance policy?

Where some companies offer this option as a part of the comprehensive car insurance, others provide it as an add-on. Hence, if the option is a part of your policy, the repairs done as part of roadside assistance will be covered.

4. The paint of my Creta is peeling off. Will the insurance cover its repair?

No. Considering the nature of the damage is wear and tear, the peeling of your Creta's paint will not be covered by your car insurance.