Owning a car in today's date is more than normal and having car insurance even more than that. But, there is hardly anyone who does not commit mistakes while using these car insurance policies. 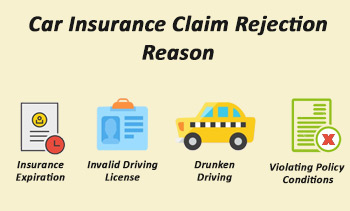 A car insurance policy provides coverage under the situation of accident, damages due to natural calamity, collision, theft, and third-party liability. Damages due to breakdown and regular wear and tear are not covered under any motor insurance policy. So, before claiming insurance and before using your car it’s very beneficial to read the following reasons which can lead to rejection of your car insurance plan and you might not get the benefits of the policy.

Lying and exaggerating accident in insurance description form can land you in trouble. An exact description of the accident, as well as damage, is very essential for the actual claim process. The fraudulence if caught will go in vain bringing to you nothing but regret. Moreover, the agent from the insurance company comes to crosscheck everything and confirms the damages.

Do your maths before buying a car insurance policy. Fraudulence in the insurance sector is a story in itself. The buyer should be vigilant while buying a policy to escape such hard times. Research on the best motor insurance companies is mandatory to invest in an insurance plan.

In case of an accident what general view of drivers is to get the car repaired and bring it in a condition that one could drive it and then go for the claim which is straight away wrong. The policy mentions that as soon as you meet an accident or your car get stolen come to the insurance company where you have got your car insured.

The first-hand intimation with the motor insurance company is mandatory in case of an accident. Any painting is done before the claim is taken as tampering. The insurer never accepts the claim and huge expense of servicing levy on policyholder after the accident just because they get the servicing before claiming the insurance. So, one should always claim the insurance first and then go for expenses.

In case the car owner has bought a second or third-hand car than its essential for the car owner to get the policy transferred in his name. The person having a name in the insurance policy papers can only claim the service and it is the same for all the motor insurance companies. Authentic documentation is done in such cases and if one fails to produce original papers then s/he does not have any say over the claim.

Few rules that need to be followed concerning the CNG/LPG kit. While buying a policy one should always keep one thing in mind that whatever extra functions the owner is adding into the car is mentioned the claim policy and especially the CNG/LPG kit. In case if it is not mentioned in there then one can not claim for any benefits related to the kit.

The person driving the car at the time of the accident should bear a valid driving license. According to the traffic rules and norms of car insurance companies can not be any compromise on the side of documentation and authentication whether it is related to the car or the driver. A valid driving license which is functioning at the time of driving and not expired is acceptable and reliable. In case the driver fails to produce that and meets an accident then the policyholder has no say over the claim. Other than this, if you have given your car to a foreigner to drive and s/he meets an accident then you may have to face a legal situation and heavy fine.

Declaration of the claim should be done within 48 hours to 72 hours. The insurance companies have their own set of rules and the claim should be within fixed time limits without any tampering or repairing of the car. In case you crash your car and the engine gets damaged but you go on driving your car without caring about the condition of our car engine then you can land in a big problem as the car insurance company can refuse your claim looking at the condition of your car engine and the accident details you have given. That means the one meets an accident s/he should land into a car insurance company from where s/he got her/his car insured.

Cars parked in no parking area has no said over an insurance claim in case it meets any accident. The carelessness of the car owner or driver is not at all entertained by the insurance companies. So, one should be very alert under such circumstances and should not meet any accidents landing himself in a financial crisis. Indians have such common issues so it should be kept in mind.

Any damage to the vehicle due to overloading of the passengers is never paid by any insurance company. That's counted under carelessness of the owner and is a sign of an irresponsible citizen of the country. Overloaded car is often prone to accidents due to imbalance. As due to such irresponsible activities accidents occur and it is also dangerous for other people driving on the road.

Cars owners are sweethearts and to decorate it they plan and install several accessories to the car, may it GPS tracking device, engine change, upgrades, gear lock, music system, etc. To keep everything working on safer sides, you should update the insurer with these facts and information. This can also be one of the reasons for the rejection of the claim.

A car registered under a motor insurance company as a personal vehicle but being used for the transfer of goods has no claim over the insurance. Inappropriate use of vehicle or vehicles with anti-social activities are not entertained by the motor insurance companies. It is against the law and one can face legal situations.

The general depletion of the car is not the concern of the motor insurance companies. It covers theft of the car, a collision in an accident, damage due to natural calamity and third party liability. But it is very common to find people who try to claim for general wear and tear of the vehicle and get a strong denial from insurance companies.

The IRDA  has defined two geographical zones for motor insurance which are:

Zone B: rest of the country

If an accident occurs in a zone other than Zone A and Zone B then the claim is not applicable and you do not get any benefit for the damage.

A car used in an inappropriate way and beyond limits has no say over the insurance claim.

In case of driving under the influence, the car owner is solely responsible for the mishaps. Whether it is the influence of alcohol, drugs, or any other intoxicant, the claim can not be processed. The driver is considered in a subconscious state and the scenario becomes police case under the court of law. In such a case the insurance company does not intervene and the claim does not function.

Consequential damages are the term that defines such damages. Damaged part if not mentioned under the policy can not be helped with. The insurance policy only works for the specific parts mentioned in the policy. So, the policyholder should assure that whatever s/he wants to get insured should be mentioned clearly.

In case of a mishap or accident if you claim for insurance amount you have to follow the procedure. Under this one has to fill the claim form whose unlocking period is maximum 28 hours and in case the time lapses and the driver drives the accident ridden car leading more damage to the car then the policyholder has no claim to the insurance policy.

India has several laws relating road and Indians have several ideas to breakthrough. But in both cases, it will not be intellectual to land yourself into troubles. So, it is better to abide by the rules and keep the above-mentioned things in mind before going for car insurance to get the best of the benefits.

You Can Also Read:-